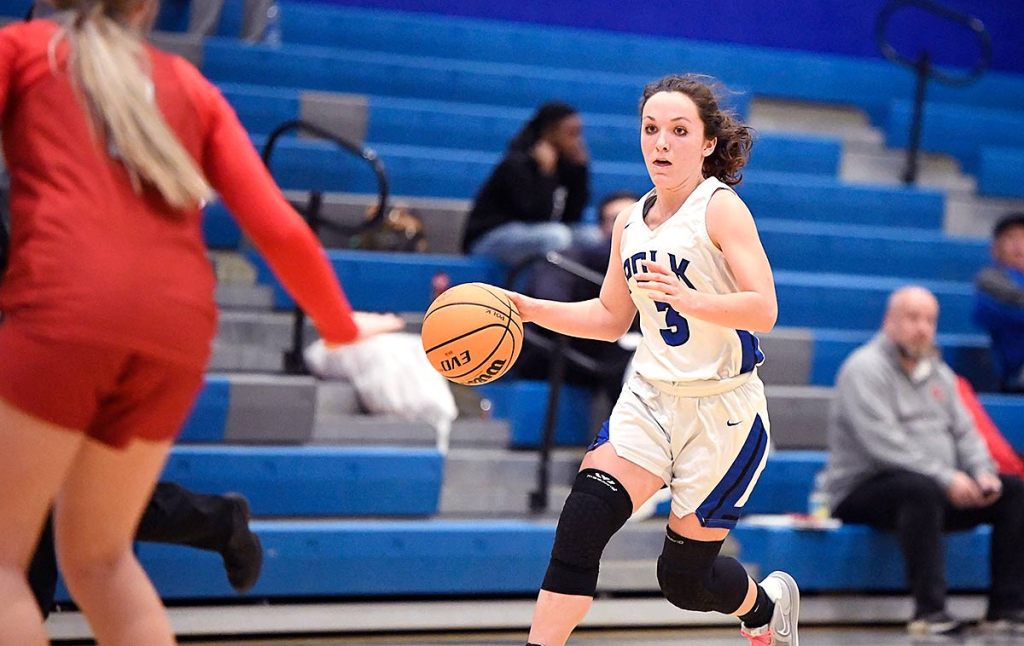 Perfect? Not at all. Perfectly satisfactory for a season opener? Absolutely.

That’s how Polk County girls basketball coach Brandy Alm felt in the wake of Tuesday’s debut of the 2022-23 Wolverines, a 61-52 home victory over Piedmont Community Charter.

Alm also felt a sense of relief in seeing sophomore Mia Bradley walking around the gym by night’s end.

Bradley, who had been vital for Polk on both ends of the floor throughout the evening, crumpled to the court with 5:56 remaining with an ankle injury. She was helped to the locker room without putting any weight on her foot, but returned to watch the end of the game and was beginning to move more freely on her tightly-wrapped ankle within a couple of hours.

Bradley’s injury occurred as part of a sequence in which Polk freshman guard Bailey Staton drew her fourth foul and the Patriots evened the score at 44-44. But the young Wolverines checked their nerves and relied heavily on sophomore Kylie Lewis, who scored 11 of her team-high 21 points in the fourth period, to pull away in the final minutes.

“I’m very impressed with how we kept our composure with the scoring going back and forth,” Alm said. “We’ve got a lot of work to do, but we did so many good things. I’m excited about what I saw tonight.”

A pair of Staton baskets and a Lewis layup on a fast break pushed Polk to a 52-46 lead midway through the final quarter. Piedmont Charter (3-3) lost Kennedy Williams, who had a team-high 15 points, to fouls with 3:34 remaining, not aiding its comeback chances.

The Wolverines still led by just four with just more than a minute remaining when Charley Dusenbury led a fast break upcourt and hit Lewis in the lane for a short jumper, boosting the advantage to six with 49 seconds remaining. The Patriots would get no closer in the final minute.

Transition points such as Lewis’ bucket were key for the Wolverines, with Staton driving an uptempo approach that often produced easy baskets on the offensive end.

“Watching them in transition in the first half, that’s exactly what we want to do,” Alm said. “In the second half, we didn’t make as many good decisions on passes, but we’ll work on that.

“I thought Bailey handled the ball well. She makes such great decisions. Kylie and Gavionna (Carson) hit the boards hard and helped us get the ball out quickly.”

Polk County is slated to be back in action on Thursday, hosting North Carolina School of Science and Math. Tipoff is set for 6 p.m.