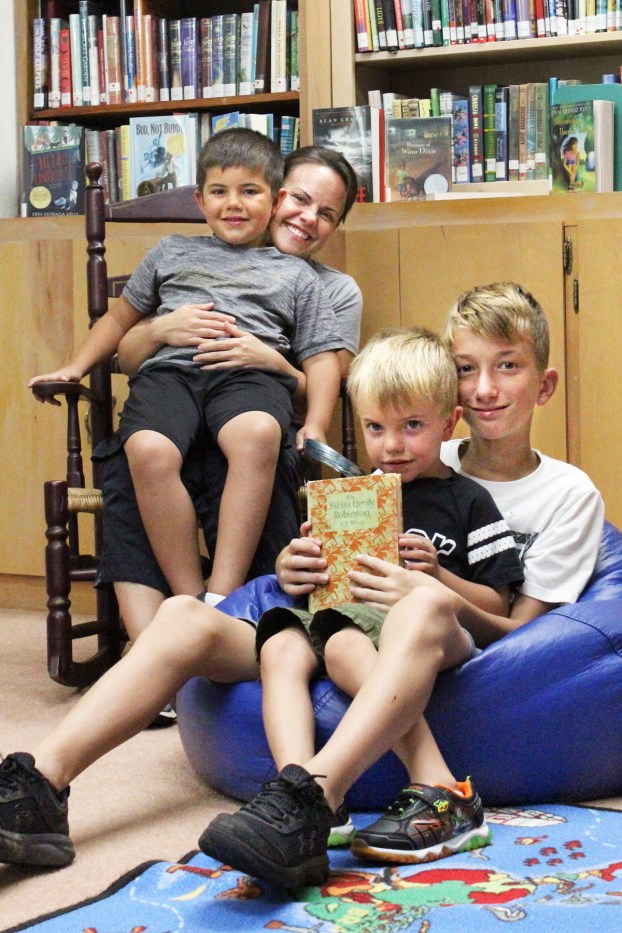 Isaiah and Leslie (sitting). Alexander and his older brother, Jayden, in their favorite spot at Lanier Library

During the commemoration of its 130th anniversary, Lanier Library is celebrating members in

this monthly column. These profiles will help the community get a better idea of the neighbors who

carry the Lanier card and are helping preserve a cultural tradition started in 1890.

“I usually come here on my bike,” says Jayden Worley. “It’s a ten-minute trip at most from home.” A home schooled eighth grader, with a booklover’s passion to read and youthful energy, he finds no challenge pedaling up the Chestnut Street hill from Trade Street.

“We joined about three years ago,” says Leslie Worley, Jayden’s mother. A nurse, born in Miami, she had always been enamored with the mountains and fell for the Foothills during a visit. “I couldn’t keep up with the number of books Jayden was reading. A library was essential, and Lanier was so close.”

“We were overwhelmed when we first came in,” explains Jayden. “So many books that I wanted to read.” Leslie continues, “I liked the historic feel and art.” Jayden adds, “But I still don’t know how to use the old card catalog.” An avid browser, he soon learned where to find what he wanted.

He remembers waiting at the circulation desk while “a short old man with gray hair” described a book to the librarian without knowing the title. It was the survival story of a boy on a plane that crashes in the Canadian wilderness. It just happened to be Jayden’s favorite at the time. “That’s ‘Hatchet’ and I know where it is,” Jayden offered. It was the first in a series and some time later, Jayden found that the man had subsequently donated all of the Hatchet books. The adventures fit with other Jayden favorites such as Robinson Crusoe, Swiss Family Robinson, and Huckleberry Finn.

Leslie notes that in addition to the all the books that Jayden goes through, he also reads to his brothers, 7-year-old Isaiah and 5-year-old Alexander.