William Voss was born November 1, 1921, in Homestead, Okla., to Carl and Anna (Schlotthauer) Voss. He had four siblings, Helen, Alfreda, Howard and Harold. After he lost his mother when he was 7 years old, his childhood years on the family farm were filled with hard work to help his father survive during the Great Depression. He often did the cooking at home.

When Uncle Sam drafted him into the Army, he trained as a medic and served in Iran as a conscientious objector for three years. After he was discharged in 1945, he enrolled at Southwestern Junior College in Texas for the second semester of the following school year. 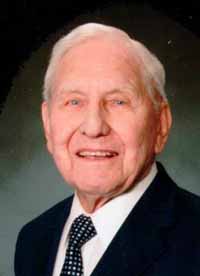 At the same time, a yellow rose by the name of Fay McMullin was midway through her senior year in high school. Their paths were destined to cross. After they were married July 24, 1947, in Jefferson, Texas, they moved to Lincoln, Neb. In the next three years, Bill earned a business degree at Union College. During their time in Lincoln, he and Fay also welcomed two daughters, Linda and Shirley, into their family.

Over the next 40 years, Bill enjoyed a full and productive career. He was a teacher in a one-room school (grades 1-7), and then taught several middle school grades in Texas. He was a treasurer and business manager of four boarding academies in Texas, Arkansas, Minnesota and Georgia. He then served as assistant treasurer, church auditor and pastor of two churches in the Arkansas-Louisiana Conference of Seventh-day Adventist, and was ordained to the ministry in 1983.

At his side throughout was his devoted wife Fay, who worked as a licensed practical nurse, a school nurse, a church conference bookkeeper and an office manager. This coming July 24 will be the 70th anniversary of their wedding. In addition to his daughters, Bill was blessed with two sons-in-law, six grandchildren and 15 great grandchildren.

In his retirement years Bill built three homes on his property in Columbus, N.C. He served actively as a member of the Tryon Seventh-day Adventist Church. He thrived on the outdoors, enjoyed gardening and loved animals. He managed a farm for several years and tended a herd of Boer goats on his own property. These activities kept him pleasantly occupied, in spite of several close encounters that left him with various injuries. He was a tough GI, though, and his yellow rose was always there to nurse him back to health.

He was known wherever he lived and served as a kindly man with a benevolent heart and a conscientious work ethic. Whether balancing the books, working in the soil, nurturing his family or studying the word of God, he was faithful to his tasks.

Bill Voss passed peacefully to his rest on April 7, 2017 at the Hospice House.

He is survived by his wife, Ola Fay Voss; his daughters, Linda (and Ron) Herman, and Shirley (and Greg) Rumsey; his grandchildren, Julie (and Mike) Andrews, Russell (and Christa) Herman, Amy (and Travis) Hulsey, Ryan (and Mindy) Herman, Tim (and Stacey) Rumsey and Laura (and Allen) Poblete; and his great grandchildren, Sarah, Marshall, Hannah, Harley, Tristan, Isabella, Zane, Carter, Owen, Amelia, James, Paul, Jenna, Isaac and Aria. He was preceded in death by his four siblings.

In lieu of flowers memorials may be made to Hospice House of the Carolina Foothills, 260 Fairwinds Road, Landrum, SC 29356 or Pathway to Paradise, PO Box 23 Kingsville, MO 64061, www.pathwaytoparadise.org.