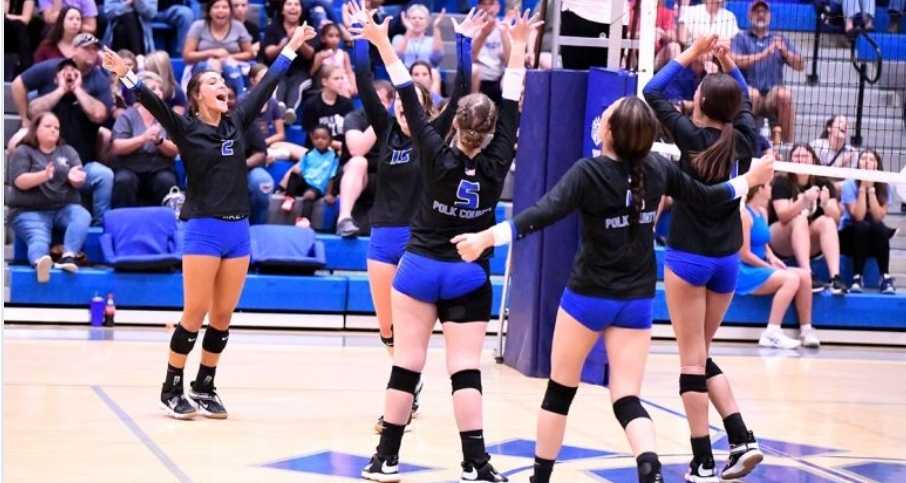 This is the win that Polk County has wanted for a long time.

Chased, coveted, dreamed of, longed for – and finally in hand.

Maybe that’s why no one wanted to leave Tuesday night after Polk County knocked off West Henderson, handing the Falcons a 3-1 loss that could just as easily, remarkably, have been a Wolverine sweep. Instead Polk took a 25-27, 25-15, 25-22, 25-16 win, its 15th in a row, two short of matching the school record for consecutive victories.

Why so much focus on the Falcons (18-4), why did the victory mean so much that the team hugged and huddled and smiled and milled about the court for so long after the win?

In large part, because West Henderson is the gold standard for volleyball success in Western North Carolina, so good for so long. The Falcons won their first state title in 1989 and have seemingly contended for one every year since – it’s a level of consistent excellence that Polk head coach Molly Hill has sought to build in her program since her arrival.

There’s also Hill’s personal connection. She graduated from West Henderson. Her older sister, Allyson Warren, is an assistant coach for the Falcons. Smartest man in the gym Tuesday night was Glenn Corhn, the sisters’ father, who paced about the gym sporting an East Henderson hat (Hill’s brother, Daniel Corhn, is the Eagles’ head baseball coach).

So did the win, Polk’s first in the series in at least a decade and maybe ever, mean just a bit more than improving the Wolverines’ record to 17-1? Absolutely.

“It brought me to tears,” Hill said. “It’s literally been nine years in the running for me. And then for kids like Ella (Waldman) who have played on the varsity level at some point for all four years. It’s been such a goal and it was so awesome to finally accomplish that.

“The thing is, for years now, I knew we could do it. It was a big mental block. It’s just awesome.”

Polk fought off game point in the first set and had one of its own at 25-24, but the Falcons reeled off three straight points for that 27-25 win, and you had to wonder if history had arrived in repeat mode.

But Polk opened the second set with a 7-0 run, weathered a Falcon rally that closed the gap to 10-8 and responded with an 8-2 streak that titled the set in its favor. The Wolverines closed the game on a Zaelea Eller ace.

West Henderson opened the crucial third set by looking to feed sophomore standout middle hitter Emma Bryson, and with Bryson pounding kills at regular intervals, the Falcons raced to a 7-2 advantage. But the Wolverines began to chip away at that deficit, with Waldman serving back-to-back aces during a run that pulled Polk within 9-7.

Still down 17-14, Polk evened the match during a flurry that included a Morgan Yoder kill, an Ada Kelley blast and a Kelley block. The teams then swapped points and the lead until, with West leading 22-21, Sophia Overholt drilled a kill to even the match, Eller served another ace, Overholt tipped a shot around West Henderson’s block attempt and a Falcon kill sailed long, giving Polk the set and a 2-1 lead.

Sensing the long-wanted victory, Polk dominated the final game, racing to a 14-3 lead. At 23-12, West did prolong Polk’s celebration with four straight points before a miscue and a Yoder ace delivered the end.

“In the fourth set, I felt like we were unstoppable,” Hill said. “We were blocking everything and we were finally swinging and getting some kills.

“Defensively, I thought we played pretty well. It was hard to get that turnaround and get the perfect pass to be able to set the perfect ball to be able to get a kill. But we adjusted really well, and that’s what I liked to see. They solved for it and they adjusted really well. They made it a thinking game, and I was really impressed by that, that they were able to see the court and make adjustments.”

Polk County is back at home Thursday to face Chase in its final regular-season home match. The Wolverines then close the season with a three-game road trip, the final one a showdown at Brevard that will likely decide the Mountain Foothills 7 Conference champion. There’s much still ahead for the Wolverines even before the postseason.

But Polk has corralled its white whale, crossed off one of its long-held goals. That no doubt will add to this team’s growing confidence entering that stretch ahead.

“This is a goal that I have always had and I knew that we could accomplish,” Hill said. “It’s been a battle every single time that we play them, and it felt so good, that we finally got over that hump, that little mental thing, and the girls finally realized how good they are.

“That’s something as a coach that I have been really trying to press for nine years, that Polk County is good. That we are, just, good.”