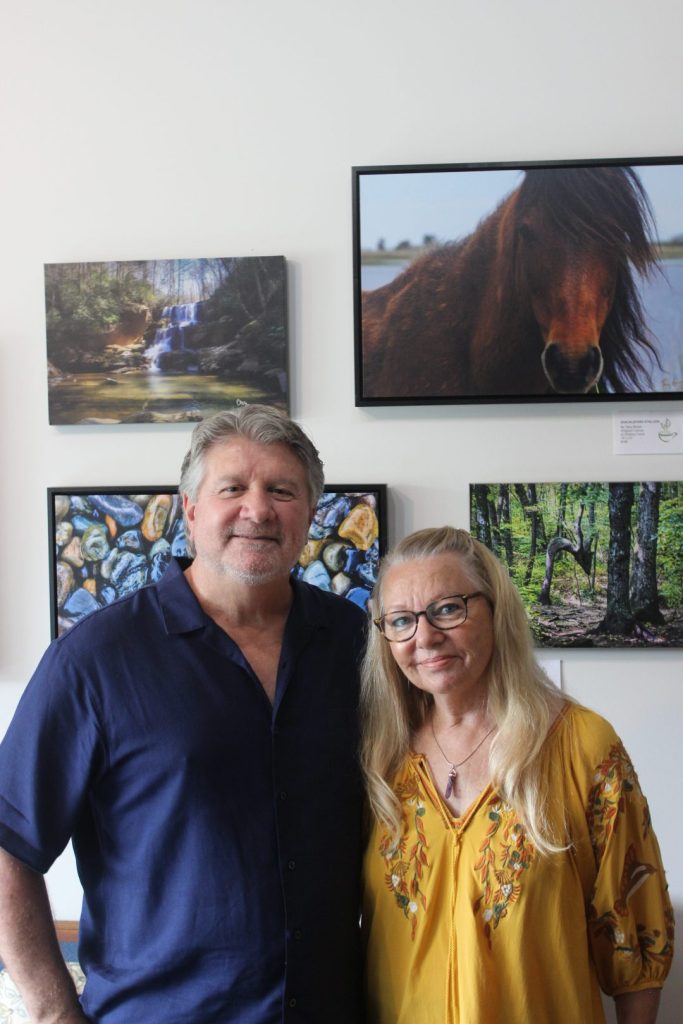 Terry and Cher Brown will be available this Friday to discuss their photography featured at Tryon Coffeehouse Co-op’s “Art with a Heart” showcase. (Photo by Storme Smith / Tryon Daily Bulletin)

This Friday, August 26, from 5-7 p.m. the Tryon Coffeehouse at 62 N. Trade St. will kick off “Art with a Heart,” an ongoing art showcase. They plan to feature local art on a rotating basis in its gallery space, and the first artists to be featured will be photographers Terry and Cher Brown of Tryon. The kick-off coincides with the Fourth Friday event held by the Tryon Downtown Development Association.

The Tryon Coffeehouse has been a stalwart for the last 27 years and is one of three businesses in the city that is open 365 days a year. Recently, Sherry Palmer, the coffeehouse’s manager, was inspired by a friend’s art to update the backroom to highlight local artists. The idea was enthusiastically backed by the owner, Kevin Parker, and “Art with a Heart” was born.

Palmer says, “The coffeehouse is a very special place, and we look forward to seeing how the gallery develops. It’s still a work in progress but ‘Art with a Heart’ really adds to the vibe of the place.”

A portion of each work sold in the gallery will be donated to charity.

Terry and Cher Brown have spent many years honing their photography skills, and are award-winning documentary filmmakers. The couple describes the gallery show as coming full circle back to their visual-storytelling roots as photographers. The photos featured were mostly taken during their first year in the area at various locations in North Carolina, and even a few Cher took with the use of a drone. She successfully mastered the skill of commercial drone-flying in recent years, acing all the tests involved and memorizing FAA rules involved.

The pair moved here from the Outer Banks after many years in Florida where they were on the St. Augustine Cultural Council. Combining their talents, they launched KEVA Creative in 2016 where they produce documentary films. They will be helping to host the Friday event and will be available to tell some of the stories behind their photos.