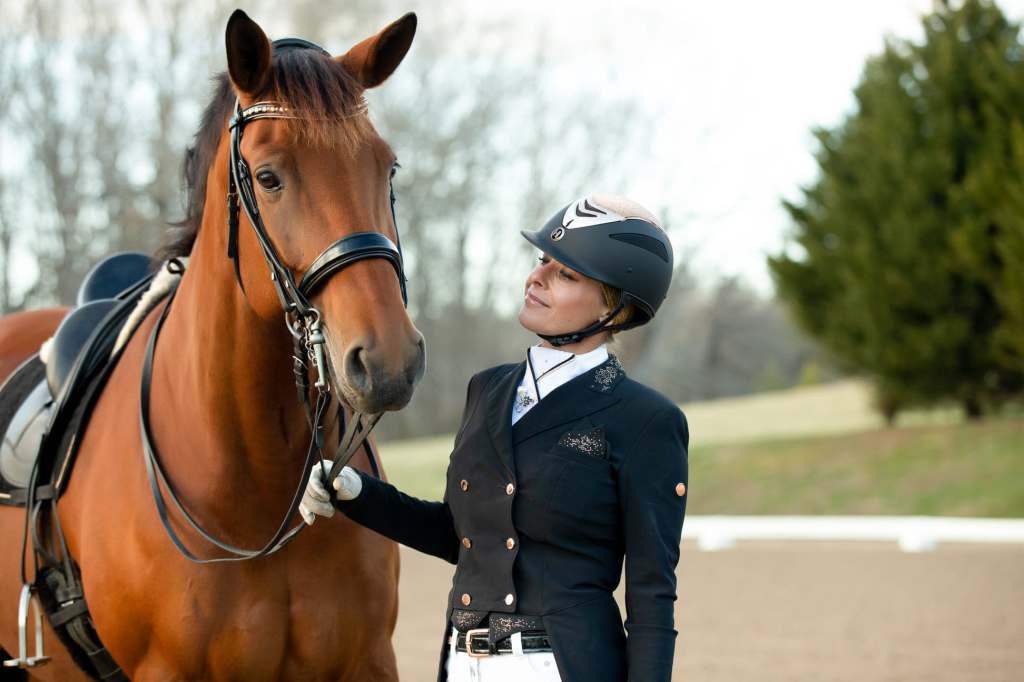 The connection between rider and horse is key

Trayce Doubek is a woman of many talents 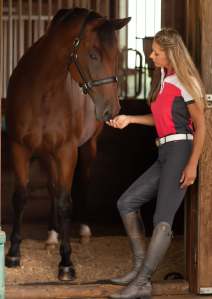 At a young age Doubek, owner and operator of Renovatio Farms in Tryon, was more than just bitten by the equestrian bug. She was bitten by an actual horse. Her mom, Sherry, tells the story of a three-year-old Trayce sneaking off in the Illinois winter to visit a neighbor’s pony and being found later with the pony’s teeth marks on her tiny shoulder. Trayce says, “I was deadset on winning the affections of that little carnivorous fellow.” And every other horse and four-legged friend has been lucky to cross her path since that moment.

Her youthful determination to work with horses shows in how she has successfully built world-class credentials as a competitor, trainer, and teacher during her lifelong journey in the “horse business,” all while creating new dreams and goals along the way. She describes her life as blessed, giving the lion’s share of credit to those who have supported her on her journey, especially to her biggest fans, her parents, Dave and Sherry. Hers is a close-knit family, made even closer after the loss of her older brother David to cancer. It is clear her love and aptitude for what she does, along with her family and friends, have helped her to succeed and survive the ups and downs of both the horse business and life. 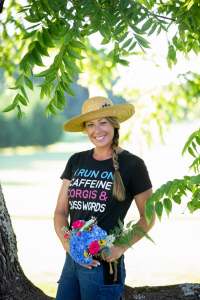 The T-shirt says it all!

Trayce says her childhood was “the best a horse-crazy girl could ask for.” Growing up in Wayne, Illinois, a town similar to Tryon in its immersion in equine culture, she was able to work odd jobs in various barns until she finally convinced her parents to give in and purchase her first pony, Brandy Flash. Her father and neighbors helped build her first perfect little dollhouse 2-horse barn, and while her father regrets not putting a golf club in Trayce’s hands at a young age, it’s obvious his early investment in his daughter’s interest in horses has paid dividends.

Those early days of her career are still reflected in her work nowadays. In her first horse show, Trayce’s beloved horse Betamax had stomach issues, and she couldn’t get on him. There she would find an early mentor and teacher in Anita Wright, becoming a working student for her. “I’d do anything to earn my two lessons a week. (Wright) was an excellent teacher and a beautiful rider and had so much patience with my young horse. She believed in him and me, and we virtually never lost a dressage test in the eventing world.” 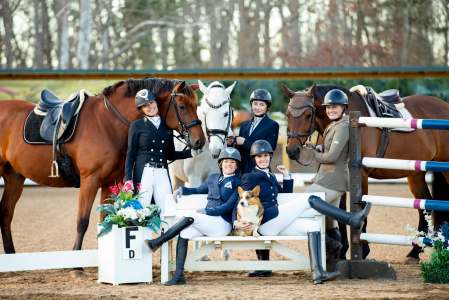 She would eventually take on the role of teacher and mentor herself, often teaching sixty lessons a week during her college years, and taking on active leadership roles in numerous local and national riding clubs even in her late teens. “Currently, I have the most dedicated and exceptional bunch of ladies in my barn. They are family. I love every aspect of teaching and training. When you do it virtually every day of your life, you have to be very creative. I have a Rolodex of analogies I have gathered over the last thirty years, which makes having a Bachelor’s degree In Education from the College of Charleston invaluable. You learn how to explain one concept in fifty different ways. I’m very much goal-oriented and love trying to assist my riders and the horses I train to achieve those goals. It’s been a lifetime of collecting feathers for your cap. I learn something about myself or my horses every single day.”

Dressage, which Trayce competes in and teaches, is  “the art of riding and training a horse in a manner that develops obedience, flexibility, and balance.” The translation could be used to define her home base, Renovatio Farms, which she came to after years of renting and outgrowing stall space in the Tryon area.

“God gave me a cookie when I got Renovatio Farms. The name Renovatio means rebirth in Latin and came from an Ewan McGregor film which, for some reason, it stuck with me, and I said if I ever owned a farm, that’s what I would name it. And so I did.”

Trayce has over two hundred plus photos of rainbows taken on her farm in the twelve years of ownership. “The sunrises and sunsets are simply magical. I’ve had A LOT of hard days, personally and professionally, but sitting on the back porch watching the sun go down over those mountains has melted many a worry away.” 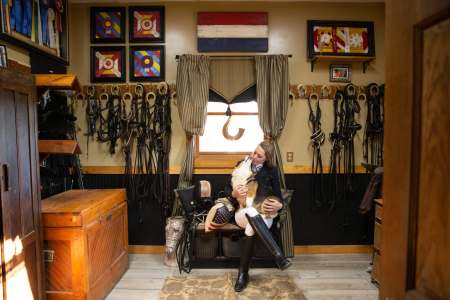 She describes a typical day at Renovatio Farms using another film reference, comparing it to Groundhog Day. “I have a fifty-acre twenty-two stall operation. So I am the CEO of the manure pile, supply orders, vet, farrier, dental, bodywork appointment maker, bill payer, stall cleaner, scheduler, rider, trainer, lesson giver, mower, bush hogger, maintenance crew, and chaos coordinator. On top of that, I rep for a saddle company out of the Netherlands called Macrider, have a small shop, and just created another business building and equestrian clothing line. I’ve also designed a training tool and have a friend (Knickknacks and Such) helping with production and the sale of that. I move and think a lot.”

Her working relationship as a rep for Macrider Saddles, a top European saddle maker, began in 2014. “I was introduced to Henriette and Luc Beikmann via another trainer. Not only was I sold on the quality and craftsmanship of the brand but them as people. Henriette is one of my closest friends and a master at what she does. I have a small tack shop that houses all the models of the saddles and bridles. We have in-house machinery and equipment to make all adjustments on the spot. It’s been wonderfully convenient for my clients to have access to it all.”

Trayce’s competitive career has as many stories as trophies on her mantle, so of course, she chooses a more recent accomplishment to highlight, even over being nationally ranked and numerous other achievements throughout her career, competing at the highest expression of horse training. “So many personal highlights in my career, but I guess most recently is on my horse Lisandro. He was deemed the North Carolina Dressage and Combined Training Champion in 2020 for lntermediare, which was spectacular for me. Literally, amidst Covid, we all adorned face masks at the show. I went completely by myself along with my sidekick Neumann the corgi. No groom, no braider, no help,  just a girl, her horse, and a corgi.” 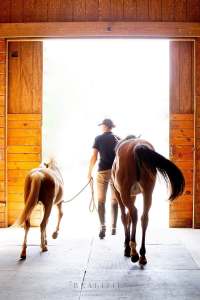 Of course, it’s not just horses running around at Renovatio Farms. Trayce’s dogs, especially her corgis, rule the roost and can often be seen being chauffeured about by golf cart, keeping an eye on Trayce during her daily routine. “Well, I can sum it up in about a sentence. Anyone who meets my dogs says they want to come back reincarnated as one. They have the life of Riley.”

Her career has recently taken a creative shift with Sui Generis, her personally designed equestrian clothing line. “So Sui Generis is also Latin, translated as ‘of its own kind,’ an expression that promotes a brand of uniqueness of its own. I’m a bargain queen, so I searched the web for months for every detail of my outfits from head to toe. I thought, what if I could take an existing coat and give it a makeover. I’m by no means a seamstress, but I definitely have enough skill to sew embellishments on. So then I began to look for fabrics and buttons from literally all over the world. I have probably 200+ in stock pieces in virtually every color from France, India, New York, Istanbul, England, etc. Almost every piece is one of a kind. I have estate pieces for stock ties and buttons that are over 100 years old. I’m working on eleven coats at the moment. It’s a blast. It took me days to come up with a name and logo. I’m weird about stuff like that. It has to feel right in all aspects before I represent it. ”

“My first actual designed piece I debuted at the 2021 Divermentos and Dressage at Motlow Creek to Benefit Brooke USA. I rode to the William Tell Overture and did a costume change mid-ride. It was a hoot. I’ve graciously been asked to ride again in this year’s benefit, which will be held at Tryon International Equestrian Center on October 20, for which tickets go on sale July 1.”

Contact Renovatiofarm.com for more information about Trayce, her farm, or the facilities.