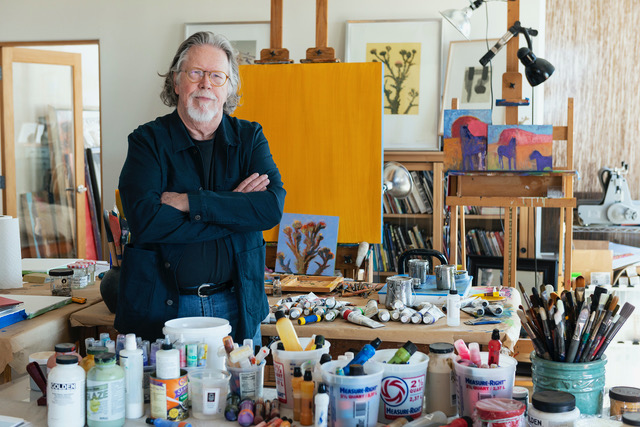 Phill Garrett at home in his studio

World-renowned art made in Mill Spring 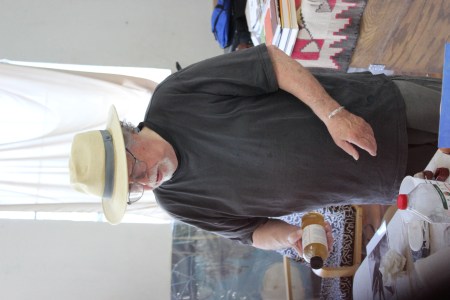 Phil shows me around his studio

Phill Garrett, an artist who specializes in printmaking and painting, currently produces world-class art at his studio in Mill Spring.

As a young man, he enjoyed the act of drawing, but he did not immediately see it as a career. He sketched and painted in his early years, taking an example from a neighbor that painted as a hobby. This influence led him to say to himself at a young age, “I can create.”

Soon after finishing his undergraduate studies at the University of South Carolina, Phil would join the navy, where the young man from Taylors, South Carolina expected to see the world. Little did he know that the majority of his travels would result from being a professional artist.

The Wade Hampton High graduate would end up taking some of his first drawing classes during his time serving in the Navy while stationed at Pearl Harbor. He began taking drafting classes at the Bishop Museum and, before long, was taking classes at the Honolulu Academy, a school founded by the Hawaii Museum of Art. There he discovered printmaking in a class taught by renowned printmaker Gabor Peterdi in Hawaii. 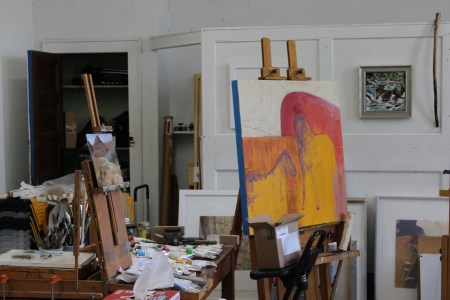 Some of the artist’s work on the easel

Peterdi, a famed painter, printmaker, and WWII veteran, learned printmaking in France and would become one of the more influential teachers of the art form in the United States. The class on printmaking, an art form that involves printing on a variety of surfaces ranging from paper to glass, would change the course of Phil’s life, along with a lithography class taught by James Koga.

After the Navy, Phil would take on San Francisco in the seventies. Making use of the GI Bill to attend the San Francisco Art Institute, one of the oldest established art schools, and where Ansel Adams founded the first fine art photography department. At SFAI, he would continue his education in painting and printmaking, earning a BFA, all while rubbing shoulders with some of the finest artists of the counter-culture. He even had a chance encounter with the late great singer Bing Crosby, who was a customer at the do-it-yourself frame shop Phil was working. 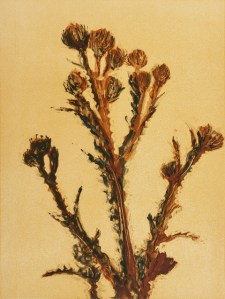 His framing skills led Garrett to believe he would be a journeyman framer when he returned home to Greenville, South Carolina in the late seventies. He found work in a frame shop on Laurens Road. At the same time, Garrett continued to work on his painting. Eventually, joining several other artists to start their own gallery, the Reedy River Works, on McBee St. He would also continue to evolve his printmaking skills, working on several monotype series featured in the Greenville County Museum of Art. Monotypes would become synonymous with Phil’s work.

Monotypes are a form of printmaking created by drawing or painting on a smooth, non-absorbent surface, then the image is transferred onto a sheet of paper by pressing the two together, usually using a printing press. Phil has even recently taught classes on No Solvent Monotype Printmaking at the Greenville Center for Fine Arts. 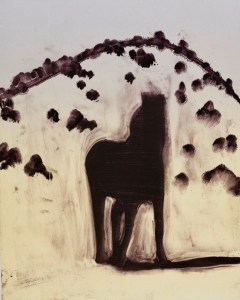 His resume as a printmaker would continue to grow with stints collaborating with printmaking shops in Charleston, South Carolina, and Alburquerque, New Mexico, and having his work appear in galleries across the country. He honed his skills over the years, earning the title of Master Printer. 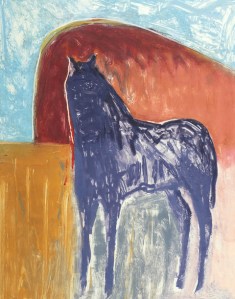 In 1998, he found King Snake Press, allowing Phil to further showcase the monotype print’s versatility. The Press located in Greenville became his main studio and allowed him to do print collaborations with other artists interested in the creation of monotypes. King Snake prints can be quickly recognized by Phil’s chop, his stamp which resembles a snake, on each print.

He would continue to paint and teach printing, eventually teaching internationally when a friend in San Francisco introduced him to the Golden Acrylic Educational Program, where he would soon become an instructor – a role he still retains today.

Phil’s association with Golden, a paint company founded in the early 1980s by venerated paint maker Samuel Golden, would lead to him lecturing all over Japan. In October 2005 and 2006, he lectured and taught workshops on Acrylic Painting Methods in Art Schools in the cities of Osaka, Tokyo, Nagoya, Kyoto, and Fukuoka, Japan. All his trips were sponsored by Golden Acrylic and Turner company of Osaka. In the Fall of 2010, Phil would go on to teach an eight-week concentration at The Penland School of Craft, a nationally known center for craft-making education and training located in North Carolina. 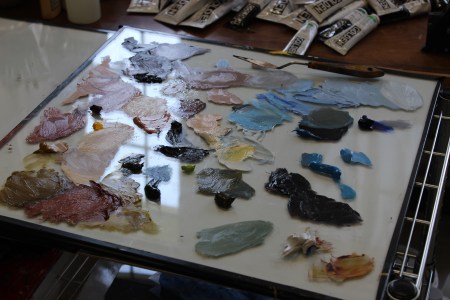 A colorful selection of acrylics

He still finds time to give  Golden Acrylic Demonstrations, which are two-hour educational in-depth presentations of the various acrylic paints, gels, and mediums manufactured by Golden. He also conducts numerous other lectures, including a Williamsburg Oil Color Lecture, a class that covers topics essential to learning oil painting, and often teaches courses in printmaking at the Greenville Center of Creative Arts and all over the Carolinas.

Phil would eventually leave Greenville for Santa Fe, New Mexico, a city known the world over for its thriving and vital art scene. The city stands out thanks to the tremendous diversity of art styles and varieties, including Native American, Hispanic, South-Western, and folk art. There he would continue his work while taking advantage of the outdoors to produce numerous Plein air paintings of the magnificent scenery surrounding his new home. 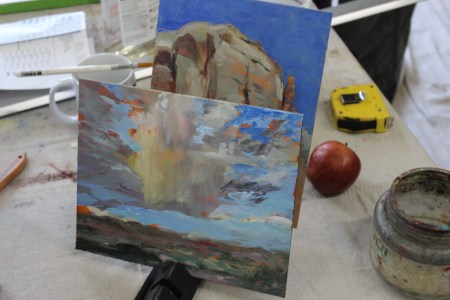 Recently, Phil has returned to the Carolinas, settling in Gowansville, to be near family. At the same time, making his studio in Mill Spring, at the Mill Spring Agriculture Center. Phil describes why he chose his present studio location, “I needed a separate studio space near Gowansville. I liked the high ceilings, open space, and good light for painting in the old school building, and the drive here gives me a chance to contemplate my day in the studio.”

Once in the studio, Phil explained his painting technique “I start with a colored ground called an imprimatur. It can be a warm or cool color. Usually, the subject gives me a clue about which color to use. I proceed with thin layers of paint and build up to thicker layers leaving parts of the colored ground exposed. I also use transparent glazes over all or part of the painting to create mood or intensity. I want my paintings to feel spontaneous and energetic, but I often work and re-work the surface many times before I feel it is finished.”

Phil’s work has appeared in numerous private and public collections, galleries, and museums, including the Bank of America and the State museums of South Carolina and Hawaii. Phil explains what has sustained him in his more than fifty years of creating art, “I find inspiration in nature. My work is informed by a kind of mythical nature. The power of storms, the spiritual quality of the elements, the beauty, grace, and ferocity of plants and animals.”

His work is available online at philgarrett.com, and the studio is open for visit by appointment.