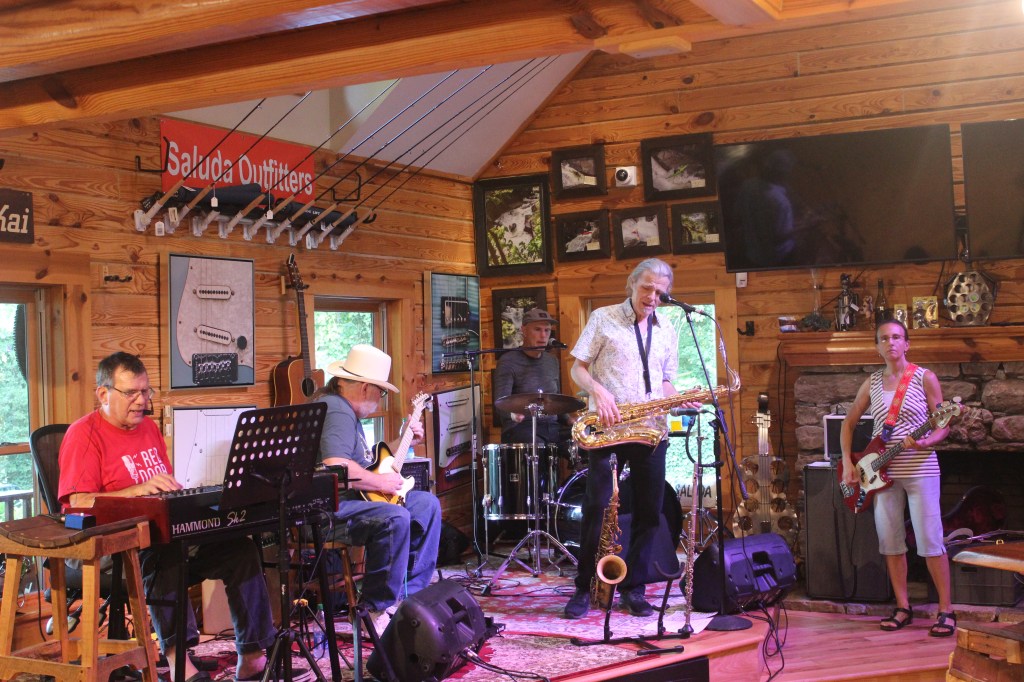 The Basement Bunch, a local band consisting of several familiar faces, is one of the gems of western North Carolina’s music scene. This versatile band of rock and roll veterans can easily cover anything from Jethro Tull to John Hiatt to Nina Simone, all without missing a beat.

It all began in 2015 when a group of friends came together to jam in the basement at the home of Jim Peterman. As an original member of the Steve Miller Band, Peterman is well known in the area. He is also known for his band, the Jim Peterman Quartet, and for playing with groups like the Shane Pruitt Band. The Basement Bunch lineup would change over the years. It now consists of original members Peterman (organ and vocals), Elaina Prevatt (bass and mandolin), and Vincent Corda (saxophone, flute, guitar, and vocals) are joined by John Hovelsrud (electric guitar) and Mike Carruth (drums).

The band takes the stage when an opportunity presents itself, most recently playing Saluda Outfitters, where they entertained a packed house. The Basement Bunch is a genuine rock and roll band. They may throw in a blues standard like the Red Preston penned “Got My Mojo Working.” Or, a set may include a cover of “It Makes No Difference,” by The Band. The diversity of songs comes together as a part of the rich tapestry of what Alan Freed named rock and roll so long ago.

The band members’ histories highlight, even more, the diverse styles and influences that make up the Basement Bunch and lead to their ability to cover so many various acts. A member of numerous bands over the years, Jim Peterman started playing in high school before joining up with Steve Miller and Boz Scaggs at the University of Wisconsin to form the Steve Miller Band. Together they would put out one of the greatest debut albums in rock history, “Children of the Future.” Jim would eventually leave the group and continue his career in the music industry. Eventually, he became an A&R man for Elektra Records. Jim’s mastery of the blues and jazz organ is a rarity and indeed a treat for a Saturday night in Saluda, or anytime someone has an opportunity to see him perform.

The band’s versatility is highlighted clearly by the other original members, Elaina Prevatt and Vincent Corda. Elaina, a graduate of Berklee College of Music, provides the heavy thump of the bass guitar and the sweet woody sound of the mandolin with equal proficiency. She’s also just at home playing different genres of music, though rock and roll is clearly her favorite. Vincent, the owner of Red Door Recording Studio in Columbus, ably switches between flute, saxophone, and guitar, all while sharing vocal duties with Jim. His flute playing skills certainly help set the band apart.

Spartanburg native John Hovelsrud provides electric guitar. A veteran of bar bands and touring bands, John brings a clean yet dirty blues guitar sound necessary for the band’s eclectic and ambitious mix of songs. The group is kept in time by Mike Carruth, the drummer, who is a fan of numerous types of music, especially funk, and has played in several local bands, including the Visions and the Landrum Springs Gospel Singers.

If you are a fan of rock and roll or just enjoy supporting local musicians, your next chance to catch the Basement Bunch will be in October at Saluda Outfitters. If you are interested in booking the band, contact them at basementbunchtryon@gmail.com, or call 828-894-5176. 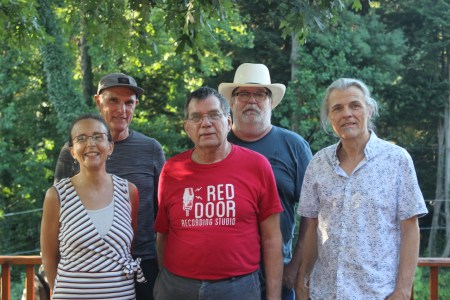