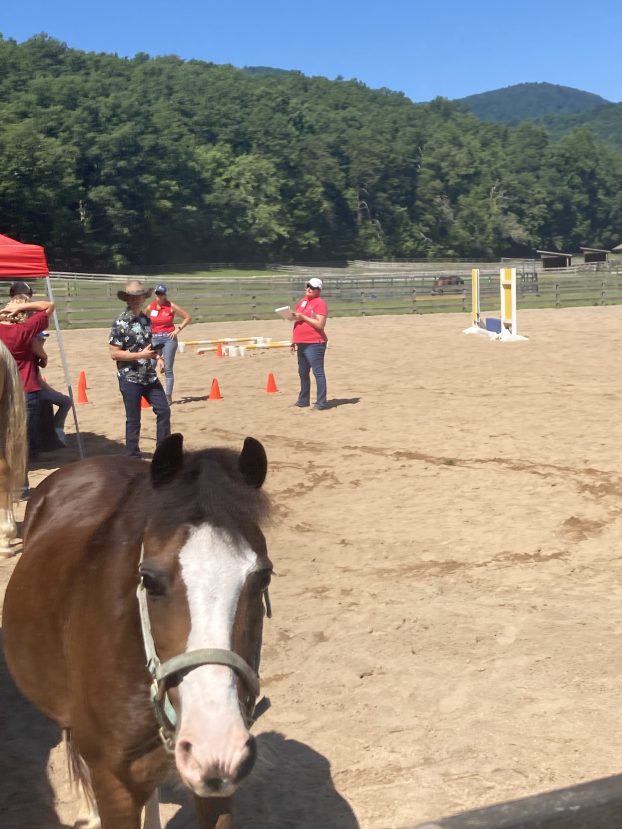 To paraphrase Winston Churchill, the best therapy for the inside of a person is the outside of a horse. Guiding Reins is a non-profit wellness program that utilizes horse and human interaction to promote self-awareness of mindset, demeanor, and behavior to help veterans, military personnel, and others in the community deal with life’s struggles.

The Campobello organization is the brainchild of Diane Prewitt, who founded Guiding Reins in 2019 after years of research into equine-assisted therapy.

On Saturday, July 23, they hosted Project at Ease at Bright’s Creek Equestrian Center in Mill Spring, for a day of camaraderie and equine-assisted activities for veterans. The two and half hour program included a dozen veterans from various branches who experienced a designed alternative approach to improve mental and physical well-being.

Army veteran and Chief Outreach Coordinator Red Palmer, a graduate of the program, is proof of its effectiveness.

Palmer says he dropped out the first time he tried to complete the 16-week program, as he wasn’t quite ready after dealing with PTSD, severe anxiety, and suicidal ideation. On the second attempt, he was still reticent when hit with a panic attack during a session. Diane asked him to close his eyes and press his chest against the body of a horse he nicknamed Mick Mars, after the drummer for Motley Crue. He found his anxiety dissipating and unexpected relief from the panic attack. That moment made Palmer a believer.

He now takes great pride in being a part of the helping hand that once reached out to him. Guiding Reins, Diane Prewitt, and more specifically, Army Ranger Justin Powell, who leads a weekly gathering of vets for coffee in Landrum, were all instrumental in Palmer’s journey.

Red is quick to point out, “You must reach out. Otherwise, it won’t work for someone. You have to want help to be helped.”

“The county aims to take care of their own and wants to find an alternative approach to wellness for their staff members. They reached out to Guiding Reins, and a pilot program was created to be offered to their employees,” the organization said in a statement.  “We reduced the number of sessions of our regular program because Polk County is being so gracious and allowing employees to come to Guiding Reins during their workday. Further, these sessions are offered at no cost to the participant thanks to Polk County covering the costs for our services.”