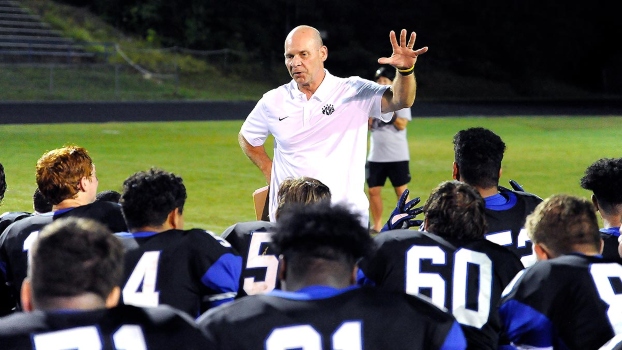 Coach Ollis addressing the team after a 2021 game

After a 7-4 (3-2) season and a hard-fought second-round playoff loss to state champion Shelby in 21-22, the Polk County Wolverines and Coach Bruce Ollis are poised to build on last year’s win total.

The experienced Wolverines return 16 starters, bringing with them a mark of toughness best exemplified by reigning Mountain Foothills 7 Defensive Player of the Year, Senior Angus Weaver. Weaver has tallied over 300+ tackles and is closing in 3000 yards rushing in his career at PCHS, setting him apart as one of the best players in the region. Coach Ollis calls him one of the most instinctive players he’s ever coached.

Angus will be joined in the backfield by strong-armed quarterback Casey Beiler, who was responsible for 15 passing TDs last year against 4 interceptions. The senior QB will utilize Coach Ollis’s pistol offense to distribute the ball to a bevy of talented wideouts including Antonio Simpson (432 yds on 31 catches) and Keaundre Green (51 tackles and 4 interceptions). The offense will be supported by backs Karlen McEntyre and Mackus Simpson. Reilly Yoder and Bryson Owen, who Coach Ollis described as “road graders for them upfront,” will look to open up holes on the offensive line.

One of many highlights on the schedule is the return of the Thermal Belt Rivalry with the Landrum Cardinals.

“It’s certainly exciting for our players and community to renew our rivalry with Landrum. I’m a little biased, but I believe it is one of the better small school rivalries in the area. No doubt all will be looking forward to the game when it rolls around,” says Ollis.

Polk put up an impressive 5-1 record on the road last season, and their schedule offers ample opportunity for fans to see games both home and away. Ollis says, “One of the best things about the MF7 conference is the close proximity of the schools. Our first game of the season, a non-conference game at Newton-Conover, will be our one semi-long regular-season trip.”

“We have a very competitive league. Six home games versus four on the road. We also have two scrimmages at home, so there will be eight opportunities to see the Wolverines in action on the home turf.”

The Polk County Varsity team gets back on the field on August 10 at 6:00 p.m., when they host the Wolverine Jamboree featuring E. Henderson, Blue Ridge, and Kings Mountain. Tickets for the Jamboree will be $5. They will wrap up their pre-season on August 13 with the Border Showcase Classic: Western NC vs Upstate SC. The matchups for that event will be Polk vs. Eastside, Brevard vs. Blue Ridge, and Owen vs. Landrum, and tickets will be $10.

In between those two events, the 12th Man Kickoff Celebration will be held on August 12 at Caitlyn Farms from 6:00 – 9:30 p.m. A $100 donation admits two adults. Attendees will be treated to live music from Johnny Edney and Friends, a great meal, door prizes, and a silent auction highlighted by a drawing for a $1000 cash prize.

Alumni, boosters, and casual fans should also be on the lookout for the players selling discount cards known as an ‘It’s a Great Day to be a Wolverine Card’ at the beginning of fall practice for $10. 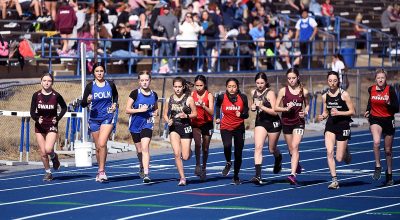