Mysterious airplane continues to raise questions in the area 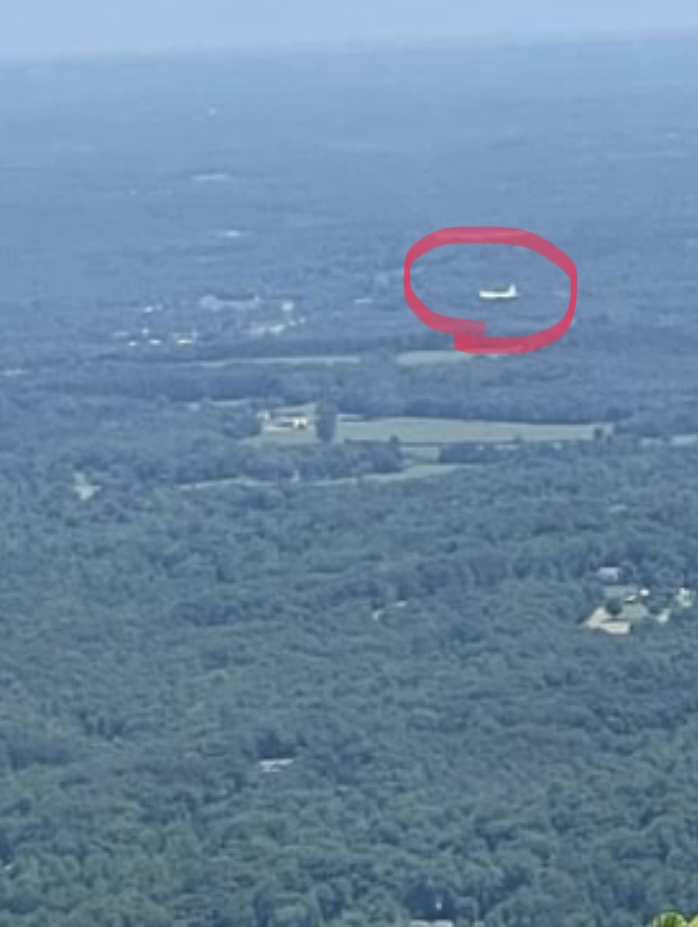 Witness McKenzie Hall was on White Oak Mountain when she saw the large plane and snapped a picture of it from above (Photo by McKenzie Hall).

FOOTHILLS––The mysterious, low-flying airplane that locals witnessed flying over Landrum and other parts of our area has continued to raise questions for residents.

On Tuesday afternoon, Landrum residents Chris and Rita Cochran saw a large, white, low-flying airplane flying only hundreds of feet over their house. Rita says, “It was 200 feet high, maximum.”

Chris says that once the plane flew over Landrum, it appeared to circle back toward Columbus.

Jason Turner, a Campobello resident, was on Airport Rd. in Campobello when he claims to have seen the cargo-looking airplane land at Fairview Airport, though a worker at the airport says he has no record of that plane’s appearance.

The worker says that a plane of that size would end up crashing off the runway.

As of press time last week, there were four known witnesses who saw the airplane. Since then, many more have reached out, saying they either saw or heard the aircraft.

There were reported sightings in Mill Spring, Campobello, Landrum, Inman, Green Creek, Lynn, and White Oak Mountain. Those who saw it describe the same aircraft––white and cargo-type, low-flying, with no markings. Jennifer Wilson of Columbus says, “It was large and white and looked like a cargo type plane,” matching each witness’s description.

Some say it was so loud it sounded like it was going to crash.

An anonymous resident of Columbus says he was inside of his house and heard the plane, thinking it was just another thunderstorm. He ran outside and said the sound was roaring.

“My God, where is that airplane headed?” he said he’d thought. “It just roared something awful. I’ve never heard one that loud, that close. I’m surprised it cleared the mountains.”

Another anonymous witness in Mill Spring says that the noise rattled his dishes in his house.

Sandra Nicholson says, “It was so loud in Lynn, you could feel it.”

According to FAA (Federal Aviation Administration), aircraft legally cannot be operated closer than 500 feet to any person, vessel, vehicle, or structure. Despite FAA guidelines for low-flying airplanes, many witnesses claim the plane flew only hundreds of feet from their houses.

Theresa Owens, who was traveling on I-385 and getting off the Fountain Inn exit, says she saw it flying below 500 feet. Rita Cochran also agrees that the plane was a mere 200ft from the ground.

“As I saw it coming in, I thought, oh my God, this plane is going to crash,” Owens says. “It leaned sideways like it was going to turn. Had it gone totally sideways, the wings would have touched the trees.”

Owens says she spotted the plane at exactly 2:48 p.m.

“I kept thinking to myself, this just isn’t normal. Something’s wrong,” Owens says. “It kept veering like it was turning, and all you saw was the top of the plane and white wings spread out. There was no marking on the top. Not at all.”

She says, “I definitely would like to have some answers on something. It obviously didn’t crash, and it obviously was flying undetected.”

Witness McKenzie Hall was on White Oak Mountain when she saw the large plane and snapped a picture of it from above.

White Oak Mountain is approximately over 2,000 ft high, and Hall says she was looking down on the airplane.

After seeing this picture that Hall took of the plane, the Fairview Airport employee says, “That airplane did not land at Fairview. The only thing I can conclude from this picture is that it is a plane that has a prominent tail structure, that doesn’t appear to have a horizontal wing on top of the tail structure. That is something, not much. It’s a plane that the wings are underneath the body of the plane, so I can tell you it’s not like a C-130 because the shape is all wrong.”

This is a developing story. Tryon Daily Bulletin will provide updates as they become available.