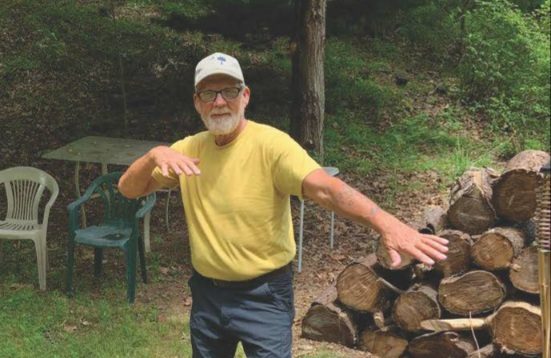 Author Stephen Walker made his way through Mill Spring, while walking all the way to New York from South Carolina.

There are few people that have seen as much of America as seventy-two-year-old author Stephen Walker. Even fewer have seen it on foot one step at a time, as he has.

Stephen Walker has crossed the country, on foot, on more than one occasion. His travels recently brought him through Polk County.

A former long-haul trucker, he set out walking after being diagnosed with stage four lymphoma in 2018. With the diagnosis his license was taken, so the native Michigander elected to travel the country by foot. And as Stephen tells in his book, Last Walk to God, he has “walked with God the whole way.”

Stephen has recently been walking his way to New York for a scheduled appearance on the Today Show on July 18, which led to him looking for a camping spot in Mill Spring near the driveway of Brian and Pamela Crissey. The Crisseys generously offered him a place not just to camp, but a temporary roof over his head in their renovated barn and an opportunity to resupply. He was in need of a fresh pair of Skechers, his preferred brand of shoes, and a new one-person tent.

Despite cancer, he travels usually from 5 a.m. to 5 p.m. with little to no pain. The pain tends to catch up with him at the end of the day. It’s obvious he’s gotten good at putting it out of his mind.

“If I died tomorrow, I lasted three and half years longer than doctors said I would,” Walker says.

He ends his days with a good meal, as he uses survivor meal kits that he rations out to last him 15 days per stretch. He also often winds down with a good movie – a close friend downloaded 30 movies on a memory card for him.

And after a good night’s sleep and a bowl of oatmeal, he is on the road again.

The well-traveled storyteller walked his way up Hwy. 9 into Polk County from Hilton Head, SC. He is now off to another place, another road, and possibly another story for his next book, which will tell of his trials and travels during the pandemic.

His stories of spending time with the nomads in Ehrenberg, Arizona were recently made famous by the Academy Award-Winning film Nomadland. There, he witnessed Skooliepalooza, the annual parade of school bus conversions – school buses converted into tiny mobile homes.

Once, after multiple bites from venomous brown recluse spiders, he survived by hiking nine miles to the nearest hospital.

He’s hiked his way across the Bonneville Salt Flats, encountered curious beavers in the Elkhorn Mountains, and made many friends along the way.

Stephen’s faith sustains him, as life on the road became even more difficult when the pandemic hit. Stephen found himself in the High Desert of California with everything shutting down. However, he never panicked.

The reason he remained calm is due to a close relationship with God, one he developed after losing his beloved Australian Shepherd, Speckles. His furry friend traveled the country in the cab of his truck as his co-pilot and protector for thirteen years. When Speckles died he never felt more alone, but that changed, he says, when God reminded him he was not.

Sure enough, a pair of locals noticed him, much like what happened here with the Crissey family of Mill Spring, and made sure he had access to water and plenty of ramen noodles, both of which he was running low on.

Stephen Walker plans to keep walking till he’s seventy-five, “I hope my travels and books will inspire people to see more of the world.” His next big journey after New York will be to walk from Disney World to Disney Land to raise money for St. Jude’s Hospital, a trip inspired by the young people dealing with cancer like him.

While we’re not sure if he’ll pass this way again, Mr. Walker will always be welcome here. He made time to attend Silver Creek Baptist Church, which he walked to. There he enjoyed some hymns and was graced by a potluck dinner from the community before he headed out Thursday morning, to the next town on his long walk.