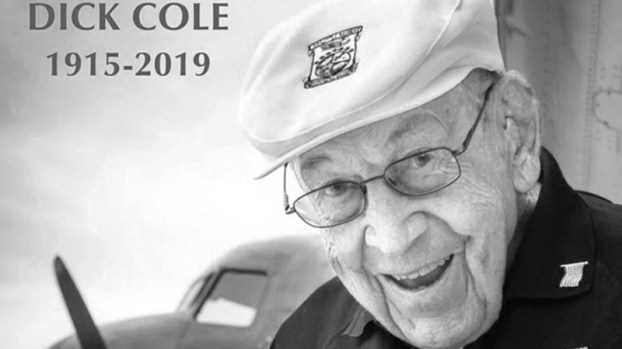 The last one of then Lt. Col. Jimmy Doolittle’s Tokyo Raiders has died, aged 103 years. I suppose that demonstrates the soundness of the former Army Air Corps physical standards for their pilots. Dick Cole was Doolittle’s copilot on the raid, which the daring young Doolittle led off a carrier deck. Their B-25 had the shortest amount of deck available, what with 16 of those big B-25s on board.

Those of us alive during WWII well remember the rapid advance of Japanese forces across the Pacific when they attacked us at Hawaii’s Pearl Harbor on December 7, 1941. The quickly conceived and executed Tokyo raid on April 18, 1942, caused little damage to military targets in Japan, but it was a great morale builder for us, as there was no other good news from the Pacific!

The raiders had to take off sooner than planned because the convoy was spotted by a Japanese fishing trawler. The Captain of the aircraft carrier USS Hornet wanted those Army airplanes off his deck and his boat out of there ASAP!

In announcing the raid, President Roosevelt referred to the carrier as “Shangri-La,” a clever nod to James Hilton’s book, “Lost Horizons.” The raid took the Japanese by complete surprise, as they did not expect any normally land-based US bombers to be able to reach their home islands.

Doolittle was awarded the Medal of Honor for the Tokyo raid. He was also promoted to General immediately, and later as a three-star led the mighty 8th Air Force. He is remembered for many pioneering accomplishments in aviation, but the Air Corps fighter pilots loved him for releasing them from flying slowly with the huge bomber formations to forge ahead to lure German fighters aloft to be engaged in air battles.

Our own Lt. Col. Norme Frost also lived 103 years and was a renowned fighter pilot who later  served on Gen. Doolittle’s staff in WWII. Norme remembered standing in ranks as an Aviation Cadet when Charles Lindbergh landed his well-worn Curtiss “Jenny” in their midst. The Base Commander ordered Lindbergh to “Get that crate off my airfield!”

Norme met and married our Betty Doubleday and honeymooned in Hawaii on his last duty assignment before retiring to Tryon. They lived on Wilderness Road, where they led the mischievous “Gang” celebrated by the late Bob Witty in his “Chronicles of Our Area” columns in the TDB.

They were active in the Tryon Little Theater and the Polk County Historical Association, to name some of their qualifications for the Second Wind Hall of Fame.

After Betty died and Norme moved into the Medical Wing at Tryon Estates, I would call him to see whether he was receiving visitors. Upon being assured that he would be glad to see me, I went out to sit before him and mostly listen. I also shared some of my engineering adventures with him, such as videos of flutter testing the Navy’s Super Hornet fighter. Their Blue Angels are flying the Super Hornet now.

Fran and I were glad to see Calvert’s Kitchen featured in the April Foothills magazine. We have enjoyed Kim and Randall Calvert’s cooking there since it opened. We Lions are happy that they provide a meeting room for us; we order off the menu! We have taken the liberty of hanging our Columbus Lions Club charter, awards and photos on his wall.

I forgot to mention last time that I am thankful to have observed my 89th birthday. My retinologist, who can read my overall health in my eyes, has made an appointment to see me one year hence. Ever the optimist, I look forward to seeing him again when I am 90.

Remember When column  Back in the late 90s, when I was President of the Polk County Historical Association and Richard Cannon... read more