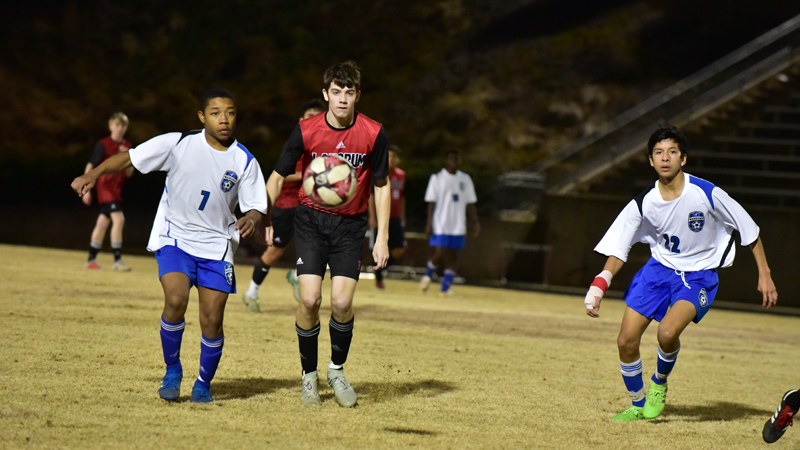 Landrum’s Dylan Arthur challenges for the ball while being flanked by two visiting Greenville Tech. Charter players during Monday’s match at Landrum.

Overcoming Greenville Tech. Charter’s speedy forwards is something that Landrum’s men’s soccer team can do, but on Monday, March 11, the Cardinals came up a little short as the visiting Warriors defeated Landrum, 4-0.

This season’s new coach Rex Rittenberg summed up the match like this:

“I feel the team (Landrum) played well in some areas.,” Rittenberg noted. “Our midfield had good intensity, making it hard for them (GTC) to move the ball in short, concise passes. Our defense did break down with GTC’s long balls over the defense (they had fast forwards), but this will be something we go over when we watch film, to get better for the next game. Our keeper, Andrew Killian, had an amazing game with several outstanding saves. Our midfielders Sam Blackwell and Manuel Bravo played really well. Overall, I am proud of the boys and their hard work.”