At the crossroads of memory lane 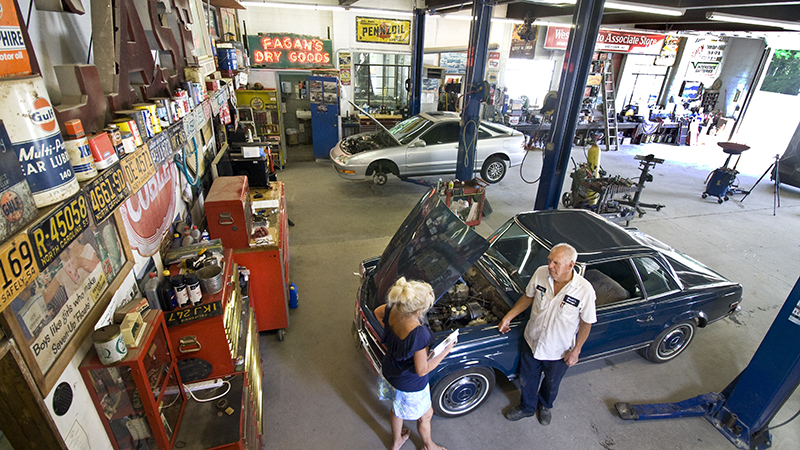 Larry Stott wanted to go faster, so his thin legs pumped the pedals of his red Western Flyer with increasing determination.

The trim and fit 14-year-old hunched over the crossbar of his big boy bike and thrilled to the wind in his dark hair.

As of 1958, this bike was his favorite Christmas present of all time, taking him not only on errands and sightseeing but to an imagined place of revving engines, dragster wheel stands and cheers.

He often awoke anticipating the fun of speeding on his Stott’s Corner racetracks, where less imaginative adults saw only north-south County 14, or Landrum Road, and Red Fox Road. Unpaved Jackson Grove Road was nothing more than a dusty ride east to the historic United Methodist Church. 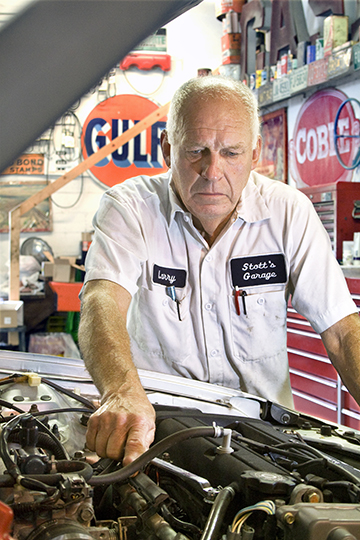 Get your car repaired at Stott’s Garage but not your shoes, despite what the sign says. Linder’s Heel Service is one of many vintage signs that Larry has collected for their sentimental value. Larry remembers raking leaves for Mr. Linder, and is still friends with the nearly 100-year-old shoemaker.

For him though, the roads and their intersection were the proving grounds for his speed and skill. Jackson Grove Road, for example, was great for fishtailing and trying to churn rooster tails from the dirt.

On the morning he would never forget, he was racing back and forth around the southeast corner of Landrum and Jackson Grove roads, the site of Stott’s Grocery and Gas. Stott’s Garage was on the northeast corner.

He passed again and again between the storefront and the Chevron pumps, in and out of the shadow under the gas station canopy. He had enough speed to make the top of a sand pile at the end of his course before spinning to rush back down. 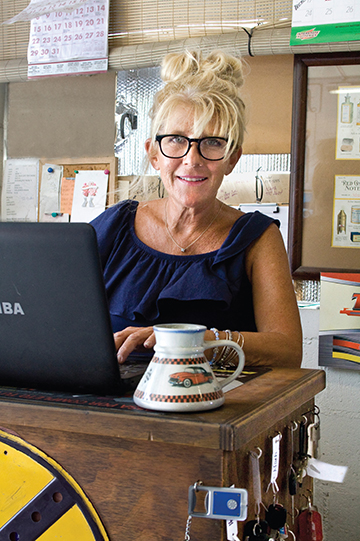 Autumn Stott, Larry’s elder daughter, is known by many for the friendly greeting at the front counter in Stott’s Garage.

“Larry, enough,” shouted his mom, standing in the doorway of the store. “Customer’s coming.”

Larry nodded “yes” but when she disappeared inside, his mind said “just one more time.”

Accelerating off the sand pile, his big tires crunched into gravel. He pedaled harder to keep momentum, leaning into the turn.

He was fast coming to the door when Mrs. Jackson stepped out, paper bags of groceries in both arms. He stomped to brake for the 60-something-old neighbor, but her eyes were much too big and getting bigger.

Sixty years later, still trim and fit, Larry shakes his head of close-cropped gray hair in disbelief at how much time has passed.

Now, standing quietly outside his garage at 4450 Landrum Road in Columbus, gazing across the road, he smiles nostalgically at what happened to him and Mrs. Jackson outside the store.

The pumps and canopy are long gone, and a cluster of horse trailers for sale or awaiting maintenance mostly hides the former storefront. With the memorabilia in the window, from a vintage Pepsi bottle to a brass lamp, one may think the building had been an antique store. 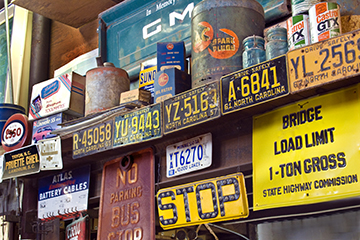 Inside, the refrigeration units and food aisles have disappeared, and the wood floors have not squeaked under heavy foot traffic in years.

“Used to be called Flynn’s Corner until 1959, when we got the new phone line in from South Carolina,” Larry recalls. “The new phone book referred to Stott’s Corner, maybe because there were so many Stotts listed. There are still Stott homes down 14 until you get to Judy Smith’s Town and Country Salon. On both sides of Red Fox there are Stotts until you get to the Pacolet Hills Baptist Church. Our property on Jackson Grove Road goes to the end of the field.

“Memories hold life together, and I have so many memories right here…family and friends.”

One particularly fond memory was from 2000. His elder daughter, Autumn, started working in the backroom as business and parts manager, and at the front counter to greet, schedule and take payment.

“Couldn’t run the business without her,” Larry says.

“Some folks may think a daughter working for her father could be tough,” Autumn says. “Daddy is a perfectionist for customer service, with rules on how everything gets done, even a process for installing lug nuts so none get missed. Sure, we have occasional disagreements, but I agree with the rules and enjoy his stories. I get to know him better and appreciate him more every day…all part of being family.”

And it’s a big family. One of her favorite memories as a girl is a Thanksgiving Day turkey lunch at her uncle’s house on the northwest corner, filled to capacity with about 50 Stott grandchildren and 30 moms, dads and other relatives.

There is a crossroads memory, however, she would rather forget if she could.

A car cutting the corner onto Red Fox slammed into a motorcycle coming south on County 14. She knew the motorcyclist, and could see the compound fractures in his left leg.

“I knelt by him, leaning over for almost a half-hour asking him to stay still,” she recalls. “I remember hearing the rescue helicopter far off, then seeing rotors overhead. I learned later that the leg had been amputated. From the tragedy, however, came an enduring friendship.”

For other memories, Autumn readily lists many of Larry’s stories and coaxes him to elaborate.

Young Larry was working on a police patrol car and took a fancy to the public address microphone. He amused himself bellowing, “Come out with your hands up,” not knowing his aunt had just settled into the outhouse behind the store.

Another time, Larry’s father, “Paps,” dug an open pit grease rack in back of the store and warned Uncle Harrison to be careful. Uncle Harrison crowed, “you’d have to be blind to miss that,” just before driving the front wheel of his car into the hole.

Then there are stories of when, why and how Larry accumulated hundreds of collectibles and curiosities, which include a metal poster for Merita Bread, featuring the Lone Ranger and a steeplechase gravity drop pinball.

“I helped Mrs. Jackson pick up can goods and groceries, apologizing over and over, despite her assurances of being OK.”

Larry’s mom replaced a burst bag of flour. She never yelled at Larry, only told him to leave the bike in the barn and never mention it before she did. Larry did go on to win the IHRA Winter Nationals in 1978 and, as recently as 2012, raced his red 1969 Camaro, pushing the 350 V8 to the max.

“Daddy, tell him about the time Grandma ran off the golfers for wanting to buy ice,” Autumn urges.

Larry chuckles, “I don’t think Vince has room for more.” •