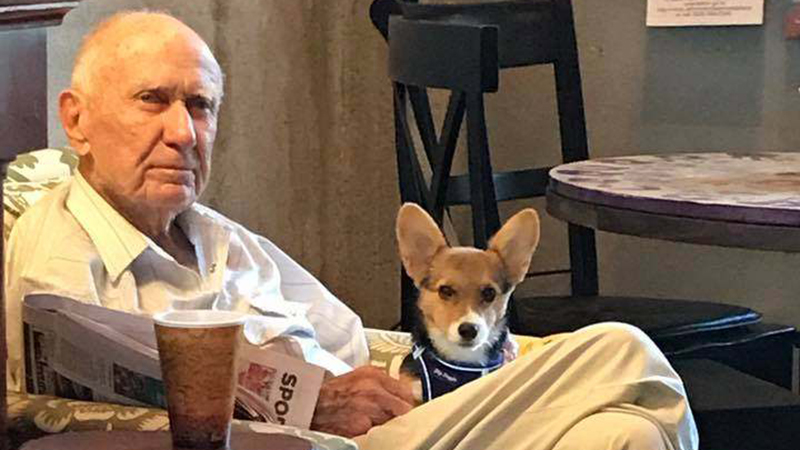 Tryon’s Jim Jackson sits at his favorite chair in the local coffeeshop. The beloved figure in the community died earlier this month at the age of 94. (Submitted photo)

Friends, family remember one of town’s most beloved residents

TRYON — Tryon’s Jim Jackson will be remembered by his family, friends and neighbors for a great number of things.

For some, it will be his morning stops at the Tryon Coffeehouse, where, after ordering his coffee — a Guatemalan with three sugars and heavy cream, no lid, please — he would sit in his usual chair and hold court, never failing to gather an audience around him as he told yet another one of his many stories about his life and his beloved hometown.

For others, it will be memories of him sticking his thumb out to catch a ride to the Triangle or one of his many other regular destinations in town — including attending services at the Seventh Day Adventist Church every Saturday and at the Congregational Church every Sunday. Though there were many throughout town who were always happy to stop to give Jackson a lift, what always delighted him most was when a complete stranger opened their passenger door to him, as it gave him a chance to get to know someone new. 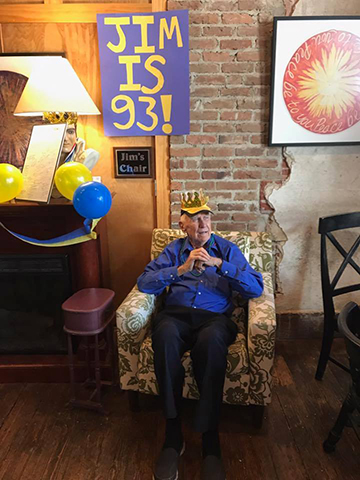 Jackson was known to many throughout his hometown, including to visitors to the coffeeshop, who gather around “Jim’s Chair” to listen to his stories from his life. (Submitted photo)

For his family, what will stick with them most are his smile, his boyish sense of humor and his gregarious belly laugh, three things he never lost — even right until the end.

Jackson was a native of Tryon, born on July 20, 1924, the son of Nelson and Laura Jackson. While born to a well-to-do family — his father and grandfather owned a cotton fabric company, Cloth of Gold, which sold products across the United States — Jackson developed a passion for helping others, the downtrodden in particular, at an early age, molded by his experience growing up in the South during segregation. 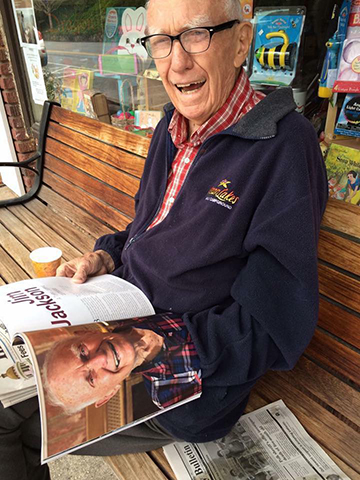 After graduating high school, Jackson attended The Citadel military college in South Carolina, where the natural-born rule breaker was constantly running afoul of his superiors. In 1943, he joined the U.S. Army, and fought in World War II, including in the Battle of the Bulge, before a frozen foot took him out of action until the end of the conflict.

After leaving the service, Jackson studied at the University of North Carolina Chapel Hill, where he received a degree in business. After that, he went to work as a salesman with the family business, which gave him the chance to travel — and play his favorite card game, bridge — throughout the country.

In the years that followed, Jackson worked several different professions, including with the ministry, with the Volunteer Service Center and with the presidential campaign for Jimmy Carter.

In 1966, while working in Pennsylvania, Jackson met Sheila, with the two marrying a year later.

“When I first met him, I thought he was more like Jesus than anyone else I had ever met,” Sheila said. “He was kind to everybody, and he always tried to get to know them better. He just loved people.”

In 1981, Jackson and his family moved back to Tryon, where he worked for the social services office until his retirement in 1987. In his retirement, Jackson kept busy with a number of different causes, including the American Field Service student exchange program.

“If someone needed help — wherever or whenever — Jim was willing to show up,” said Tryon Mayor Alan Peoples, who met Jackson while serving as principal of Tryon High School.

In the nearly four decades since his return to his hometown, Jackson developed deep friendships with many, often over games of bridge or by catching a ride with someone in town — something Jackson was particularly fond of, as he once hitchhiked from Tryon to Portland and back, riding with 44 different people over six days.

“He accepted people as they were,” Peoples said. “It didn’t matter who you were, where you were from or what you did — he accepted you. I don’t think there are many people who are like that.”

True to his nature, Jackson would help out people in need however he could, be it helping them find a job or giving them a place to stay for a while. As his family points out, Jackson would often leave his home every morning with $100 in his pocket and would return without a cent left, giving out his money either in the form of tips at the coffeeshop or just to people who could use a little help.

“I heard someone describe him as the ‘conscience’ of Tryon, and I think that’s a good description,” said Bill Ingham, a Tryon commissioner who started the Tryon Coffeehouse in 1998. “He always did the right thing.”

From those who used to sit around “Jim’s Chair” at the coffeehouse to listen to one of his stories to those who used to always stop when they saw his thumb out along the side of the road, many in Tryon feel there is a void left in the community now that their beloved neighbor is no longer with them.