GREEN RIVER COVE — A family’s mobile home was completely destroyed on July 7 on Green River Cove Road after the owners said they could not get cell service to call 911.

Nikki Werhan and Brandon Howard said they lost everything except the clothes they and their children had on their backs around 1 a.m. July 7. 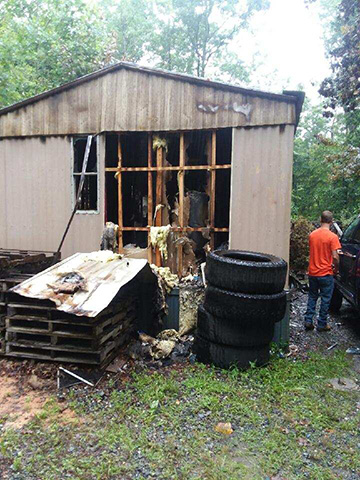 The couple said the family lost everything in the fire. (Submitted photo)

“It took me 10 minutes to get a call out,” Werhan said. “I just kept hitting redial. I couldn’t hear the dispatch at all.”

Werhan said her family was asleep when the fire started. She got Howard’s two boys out of the house and to the road, and tried to call 911. Howard was inside with a hose trying to fight the fire, which they believed was electrical and started in the kitchen.

Werhan said she recently switched phone service to Verizon because it was the only option for service in her area. She said there was a complete outage the afternoon of Friday, July 6, and the morning of Saturday, July 7.

After continuing to hit redial, Werhan said Polk County dispatch called her back around 1:15 a.m. She said her phone never showed that she had called. 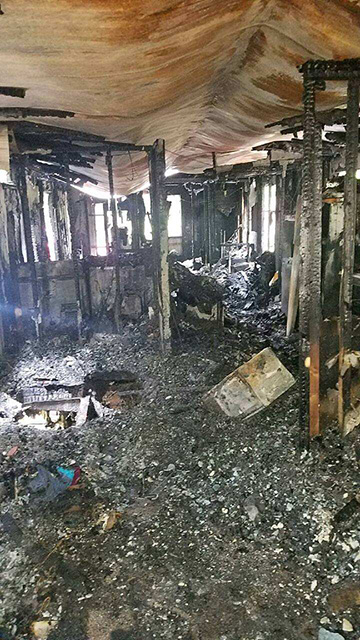 A fire completely destroyed a Green River Cove home in Saluda on July 7, with the owners saying they could not get a call out to 911 because of a Verizon outage. (Submitted photos)

Werhan said Howard woke her up and asked if she smelled the smoke. They discovered that half their kitchen and living room was in flames.

She said Howard’s 1 and 3-year-old sons were on the other side of the house, so she got them and took them to the road while trying to call 911. Howard stayed inside and poured buckets of water on the flames.

“Flames were coming out the windows,” Werhan said. “He was inside with the garden hose because, obviously, the fire department didn’t know the fire was going on.” 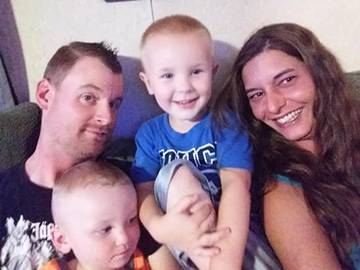 Werhan said the family lost everything, including the family dog. She had just gotten paid and all her money was in her wallet, which went up in flames with the mobile home. Their vehicle also burned.

“There’s not a fork left in our house,” said Werhan. “By the time I got the kids out, you couldn’t see anything. Finally, I started screaming because I couldn’t see [Howard.] I lost my miniature pinscher. We walked out with what we had on that night. The kids didn’t even have shoes on.”

Werhan said they are currently staying in a camper.

“Red Cross helped us, and we’ve had help from local churches,” she said.

The Bulletin reached out to Verizon for a response on the outage and the fire.

Verizon customer service said they did not show any outages in the area during those times.

The call for a response from Verizon took one hour and 18 minutes, and a supervisor entered a ticket to send engineers to the area to check the towers.

The supervisor also said Verizon customers in the area can call 800-922-0204 to work on individual phone issues and to credit their accounts for the outage.

There is currently a petition circulating regarding the current service in the Polk County and Landrum areas. People wishing to sign the petition can visit thepetitionsite.com/261/240/763/verizon-polk-county-amp-surrounding-area-customer-complaints.

There is a GoFundMe page set up for the Werhan and Howard family. To donate to the family, people can go to gofundme.com/rebuilding-for-nikki-and-brandon.