Joshua Cuthbertson, 25, was sentenced to six to 17 months in prison, which was suspended for him to serve 18 months of supervised probation as well as court costs, according to court records. 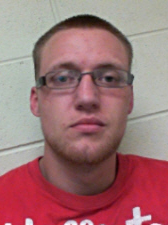 The Polk County Sheriff’s Office arrested Cuthbertson last year after officers were called to 956 Polk County Line Road in Mill Spring for a report of a shooting on Aug. 6.

Cuthbertson had a domestic violence protection order against him, which stated he was to have no contact with his ex-girlfriend, nor could be at her residence on Polk County Line Road.

Sheriff officers said Cuthbertson went to his ex-girlfriend’s house and waited outside, bringing with him a container of gasoline and a baseball bat.

After dogs were alerted to something outside the home, Keith Self — who was dating Cuthbertson’s ex-girlfriend at the time of the incident — came out to check why the animals were barking.

According to sheriff reports, Self smelled a strong odor of gasoline at his vehicle and went to investigate. The man discovered Cuthbertson behind his vehicle outside the residence.

An altercation between the two men ensued, with Cuthbertson allegedly attacking Self with a baseball bat, hitting the other man multiple times in the head. Self fired a gun, striking Cuthbertson three times; once in the shoulder, once in the groin area and once in the buttocks, according to police reports.

Self gave first aid to Cuthbertson following the shooting until emergency personnel arrived, according to reports.

Self was not charged in the incident.

Cuthbertson was transported to Spartanburg Regional Medical Center and, while at the hospital, was charged with felony assault with a deadly weapon with intent to kill and domestic violence protection order violation.

The jury deliberated late Thursday, as well as Friday morning and afternoon, before members delivered the guilty verdict.

Our country and its flag