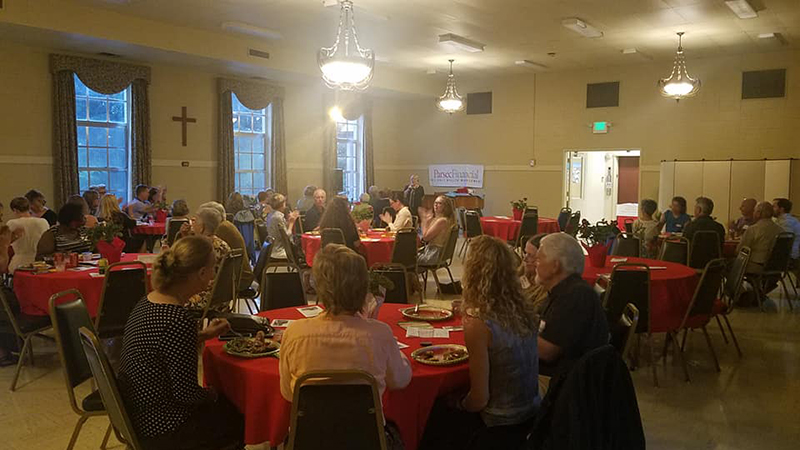 Wanda May remarked on her last year in this term as TDDA president with enormous gratitude to the Polk County Community Foundation for providing support to hire an executive director and grow TDDA’s presence in the community.

TDDA recognized awards of excellence in promotion of the area to Our Carolina Foothills’ Art of the Horse, a project bringing 32 fiberglass horses to Polk County and Landrum. All horses were painted and designed by local and regional artists, and sponsored by local businesses.

Garguilo saw a vision for downtown Tryon when he purchased the former, boarded-up Cowan’s Grocery building in 2000. The Shops of Tryon building at 112 N. Trade St. has been home to retail, restaurants, offices and more.

Garguilo has always volunteered to help with TDDA in any way possible. In 2003, he helped build 20 wooden Tryon Horses to be decorated and auctioned off in the “Parade of Ponies” fundraiser. The kitchen space in the Shops of Tryon was also donated for use for TDDA’s Farm to Trade event on June 24.

Della Pullara and The Tryon Bottle were awarded for their contributions to the downtown. The Bottle made a big leap when moving to a new location in the renovated Missildines building.

TDDA awarded outgoing president May with the first spot on the inaugural TDDA Hall of Fame. Wanda May has served with TDDA for over 20 years, since its beginning as the Tryon Business and Beautification Association when she owned The Book Shelf.

Wanda has been a guiding force in TDDA’s position in the North Carolina Main Street Program, engaging volunteers and garnering support for downtown improvement. She was on board when the streetscape project began nearly 20 years ago, and it is only fitting she is the first inductee to the Hall of Fame in the year the streetscape program was completed, representatives said.