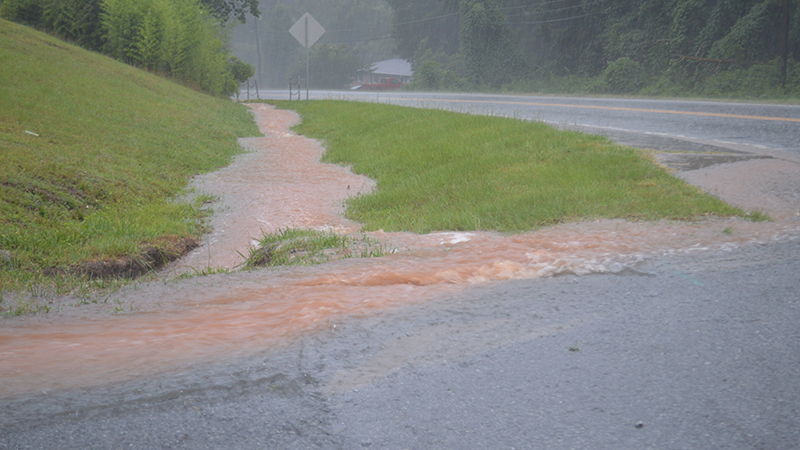 This drainage ditch from the Fred’s parking lot leads to a culvert just north of the Hay Rack on Highway 14. The sheer volume of water flowing downhill often proves too much for the drainage system. (Photo by Catherine Hunter/Tryon Daily Bulletin)

Along Highway 14, just north of the Hay Rack, water gushed over culverts, flooded into the Fred’s parking lot entrance and over the highway. The power was out from approximately 6 p.m. until 10:30 p.m.

The city of Landrum has approved funding to address the drainage problem along Highway 14 that is affecting the Hay Rack. In the June city council meeting, council members examined a report detailing problems of drainage and storm water runoff throughout the city. The report proposed short- and long-term solutions, and reported the projected cost of each.

The council faces the problem that most of the areas affected by the drainage problems are caused by streets under the jurisdiction of the South Carolina Department of Transportation. SCDOT will not pay for repairs to streets that are not either major thoroughfares or interstates.

During the work session for the June meeting, council members expressed concerns about the repair costs to fix the drainage issues, which could be as much as $300,000. In a discussion about the possibility of the city taking over the streets, and handling all repairs including the drainage problems, council members expressed concerns about the poor condition of the streets and the cost to cover repairs.