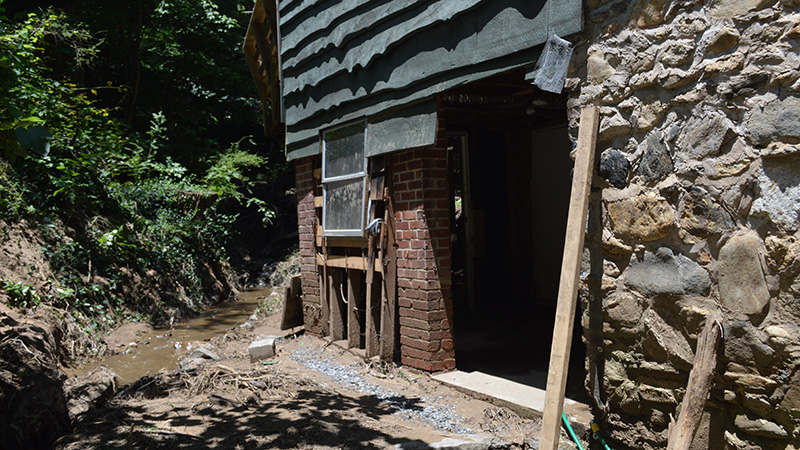 The basement wall washing away may have been all that saved Bo Giordano that fateful Friday night on May 18, as a wall of water, trees, rocks and mud pinned him to the side of his house on Highway 176. (Photo by Catherine Hunter/Tryon Daily Bulletin)

Inspired by conversations with Tryon firefighters and emergency personnel, this is the third in a series of articles describing the events on Friday, May 18, and the days that followed, as a result of the natural disasters that occurred in the Pacolet Valley and other portions of Western Polk County.

TRYON — “We got in the cars and fled over a mud-covered road,” said Bob Giordano. “You don’t know what it’s like until you’re in it.”

Giordano, his wife Pamela and their daughter Haley live in the stone house on Highway 176, not far from the worst of the mudslides that happened the night of May 18. That Friday night, Giordano heard a big whoosh and went out to see what was going on.

The next thing he knew, Giordano was pinned against the wall of his house by a flood of rushing water, trees and boulders.

”It was a wall of water, trees and rocks at least 4 feet high and 3-and-a-half feet wide,” he said. “It slammed me against the wall and I couldn’t move. The rocks were hitting the deck supports. I thought the deck was coming down on top of me.”

Fortunately, the basement wall washed away, giving the water someplace to go and Giordano was able to pull himself free. He and his family piled into the car and made it out to stay with friends in Columbus.

The Giordanos returned on Saturday only to evacuate again when word went out for an area wide evacuation by Sunday at 5 p.m.

On Saturday afternoon, while rescue teams were busy helping refugees who were trapped at the Caro-Mi Dining Room walk through the mud to safety, other teams met to discuss the next step.

First, do whatever is necessary to preserve life and deal with all immediate threats to lives and safety. Second, make sure the situation does not become any worse than when they arrived. The third goal is property conservation — teams do what they can to protect people’s homes and land.

Tennant said by Saturday afternoon, they had made sure people were safe and there were no immediate threats.

However another threat was looming. The weather service was predicting heavy rains for the region coming in Sunday night.

This meant the teams were at goal two, and it was their job to make sure the situation did not get any worse.

Authorities decided to notify residents of a voluntary evacuation. They drafted a letter stating that professional geologists had surveyed the area and there was a real danger that the additional rainfall could cause more landslides.

The letter requested all residents to evacuate by 5 p.m. on Sunday. It stated that, if a resident did not evacuate, they could be in danger from additional slides and help may not be able to reach them for some time.

“Should a catastrophic event occur, it may take days to reach and rescue anyone affected,” the letter stated.

With copies of the letter in hand, rescue personnel spent all Saturday afternoon and Sunday until 5 p.m. knocking on doors to let residents know about the danger. They told people there would be a Red Cross Shelter at Polk County Middle School and asked people to let law enforcement know that they had evacuated and were safe, or had chosen to stay.

Tennant said rescue workers visited every home in the area and either talked with someone or left a copy of the letter where they could find it. Rescue teams even put people in their own cars and personally drove them to the homes of friends or family members or wherever they planned to stay.

Like Giordano, many residents evacuated, but some chose to stay.

“Even in the case of a mandatory evacuation, we can’t make them leave,” Tennant said. “We do try to tell them that this was their last chance and if they decide to stay, they will be on their own for a while.

Fortunately, the expected rains did not come and the rescue teams got a respite.

By Monday morning, the North Carolina Department of Transportation was on the scene starting to clear 176. Other teams began to assess the extent of the damage and the Tryon Fire Department officially shut down the rescue efforts and moved into goal three — recovery of property.