A strong spring helped Polk County surge to a second-place finish in the Wells Fargo Conference Cup competition for the Western Highlands Conference in the 2017-18 academic year.

The Wells Fargo Conference Cup is a companion to the Wells Fargo Cup, and recognizes schools with the best overall interscholastic athletic performances within individual conferences. Wachovia, and now Wells Fargo, has sponsored the conference awards program since 1980. 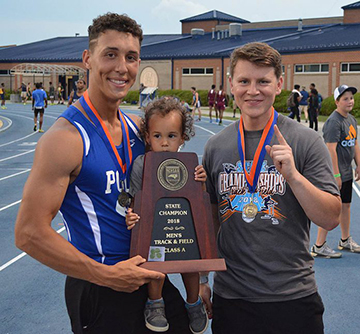 Polk County seniors Dillon Overholt (left) and Wyatt Derkach pose with the 1A state track and field championship trophy won by the Wolverines. (Submitted by PolkSports.com)

In most conferences, points are awarded based on participation and standings in conference play. Each conference determines its own method of awarding points.