A new dawn for an important piece of Tryon history 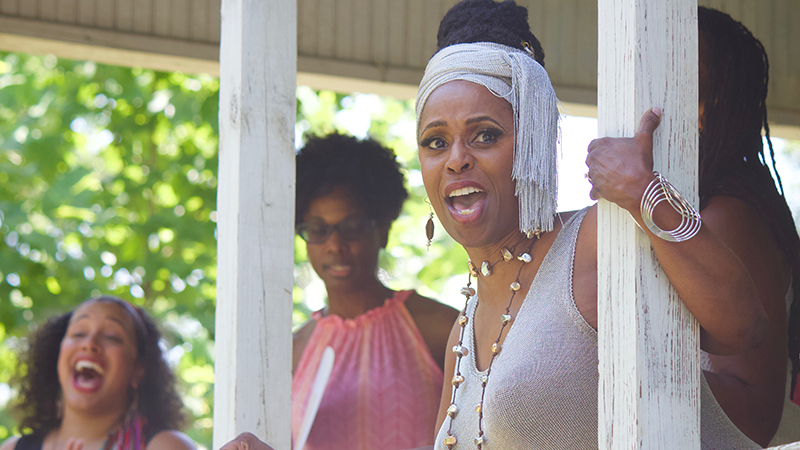 TRYON — Situated at the corner of East Livingston Street and Fred Lyles Circle near the outskirts of Tryon, a small, three-room wooden house — which, judging by its worn exterior, has certainly seen better days — may not appear to be worth a second glance to those passing by it.

However, it was inside this quaint residence where one of the most influential voices in music — and the civil rights movement — was born 85 years ago. 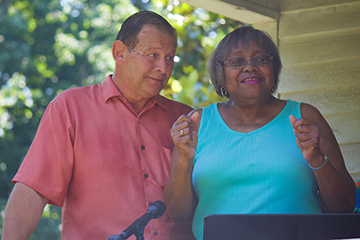 Frances Waymon Fox, the younger sister of famed singer Nina Simone, addresses the crowd outside her sibling’s childhood home in Tryon Tuesday afternoon. The National Trust for Historic Preservation named the property, located at 30 E. Livingston St., a National Treasure this week, and will work with the home’s current owners to preserve the vacant house, with the goal of opening it to the public. Standing next to her is Tryon Town Commissioner Crys Armbrust. (Photo by Ted Yoakum/Tryon Daily Bulletin

Now, several months after her induction into the Rock and Roll Hall of Fame and 15 years after her death, the legacy of Tryon native Nina Simone will live on yet in another way, as the National Trust for Historic Preservation has declared her childhood home at 30 E. Livingston St. a National Treasure. The nonprofit organization’s African American Cultural Heritage Action Fund announced plans to work with the four artists who purchased the property in 2017 in order to help preserve the deteriorating structure, with the goal of eventually opening the house to the public.

On Tuesday, in conjunction with the national celebration of Juneteenth — the annual celebration of the emancipation of enslaved blacks in the South — representatives with the National Trust celebrated the proclamation of the home as a National Treasure along with artist Adam Pendleton, one of the owners of the property, and others connected with the project with a special ceremony outside the house. Throughout the afternoon, members of the public were given the opportunity to tour the small building, which currently contains historical furnishings similar to the ones that would have been inside the home during Simone’s early childhood. 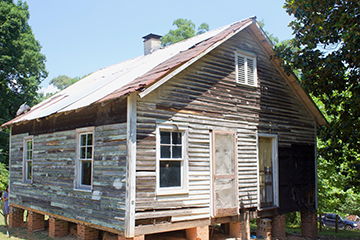 The deteriorating structure was purchased by four artists in 2017, who have worked with the National Trust since October to preserve and reuse the home. (Photo by Ted Yoakum/Tryon Daily Bulletin)

Singers Lydia Salett Dudley, Yolanda Rabun, Lenora Helm and Mary D. Williams also performed for the public throughout the day. To close out the festivities, Tryon’s Rogers Park hosted a free concert in the evening.

During his presentation Tuesday morning, Brent Leggs, director of the African American Cultural Heritage Action Fund, shared the National Trust’s plans to preserve Simone’s former home. The representative said the organization will spend the next 18 months seeking new protections, evaluating preservation needs and conducting market and feasibility studies to develop a sustainable new use for the home.

Leggs said he was first introduced to Pendleton in October, with the two quickly coming up with ideas on how to get the home named as a National Treasure, and how to move forward with ensuring it remains intact for generations to come, Leggs said. 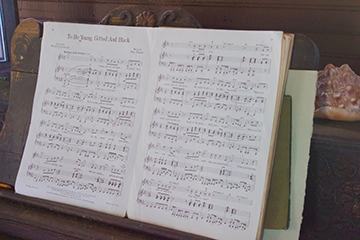 The vacant property is currently filled with furnishings from the 1930s, similar to the ones Simone’s family may have used when they occupied the structure. The property owners have also placed several things inside related to Simone’s legacy, including some of her sheet music. (Photo by Ted Yoakum/Tryon Daily Bulletin)

“We hope this moment will allow us to inspire a new generation of activists, artists and preservationists to work together to preserve more historical sites like this,” he said, following the presentation. “It’s a beautiful day.”

Simone was born in the Livingston Street home as Eunice Kathleen Waymon on Feb. 21, 1933, to John Divine Waymon, a dry-cleaning shop owner, and Mary Kate Waymon, a Methodist minister. It was inside the 660-square foot clapboard pier and beam house that Simone first began playing piano at 3 years old, later learning under Tryon’s Muriel Mazzanovich at 10 after her talent became apparent to the rest of the community, with many of her neighbors pooling money together to pay for her lessons.

Eunice changed her name to “Nina Simone” at 25, when she began performing at a bar in Atlantic City — in part to ensure her mother, a strict minister, did not find out she was singing at such an establishment.

Simone went on to become a legendary singer, performing in multiple genres. Known as the “High Priestess of Soul,” the woman’s upbringing in the rural Jim Crow South played a huge influence on her art, and prompted her to become a prominent voice during the civil rights movement.

Among those attending Tuesday’s ceremony was Tryon Town Commissioner Crys Armbrust, the founder of the local Nina Simone Project and the leader of the project responsible for the construction of downtown’s Nina Simone Plaza, which contains a sculpture of the famous artist. Armbrust, who described Simone as a “timeless talent,” thanked the National Trust and the current property owners for taking action to preserve a portion of the singer’s history and legacy of fighting for equal rights.

“What we are doing today is part and parcel of a large, complex story of America,” Armbrust said. “One of our country’s sayings is ‘E pluribus unum’ — out of many, one. [Let’s] bring the many into one as we move forward into a new day, a glorious day.”

Standing alongside Armbrust was another person delighted to hear the announcement — Frances Waymon Fox, Simone’s younger sister. Although she never lived in the house herself, Fox thanked everyone responsible for the “momentous endeavor,” especially as her sister’s music continues to only grow in popularity, years after her passing.

Aaron Burdett Band to kick off Top of the…