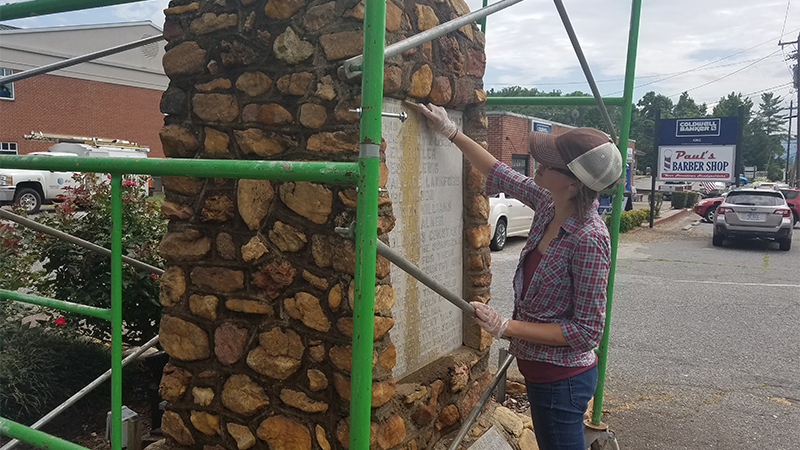 Preservation of Doughboy Statue in Columbus begins this week

Polk County agreed in May to spend $1,800 per year for Warren to clean and maintain the doughboy.

Warren said Wednesday as she was cleaning the fixture that she is also analyzing the statue to be able to provide recommendations for its restoration.

Warren said the sculpture is in good shape, considering its age.

The doughboy statue was installed in 1925 to honor Polk County residents who served in World War I.

The doughboy stands on a local stone base with beaded mortar, with two carved granite plaques at the base.

Polk County commissioners decided last year to research repairs to the doughboy because of some damage, including chipping that has been done over the years. The Polk County Appearance Commission researched options and presented those to commissioners last month.

Warren began working on the sculpture Wednesday, saying she is cleaning and assessing the entire structure, not just the marble.

“While I’m doing this, I’m actually looking at every inch,” Warren said.

She explained that she is cleaning it with chemicals and the bright orange color left on the sculpture is biological growth dying, which could take a couple of weeks to clear up.

Warren plans to come back in early fall to do more preservation of the statue.

“I’m working mechanically and chemically to get the sculpture in better condition,” Warren said.

Polk County Appearance Commission Chair Joe Cooper told commissioners last month it was recommended not to do repairs to the chips on the statue because new materials are more likely to cause trouble than the doughboy itself.

The doughboy’s current condition includes the surface actively sugaring, resulting in a compromised surface that requires consistent and general maintenance; breaks and/or missing areas of the sculpture, including chips along the brim of the hat, the tip of the nose, areas of the right ear and the muzzle of the rifle; and staining.

Warren will provide any recommendations for restoration of the doughboy to the county as she preserves and analyzes it.

Commissioners also last month discussed the possibility of placing bollards around the statue to protect it from being struck by a vehicle.

Polk County’s Doughboy Statue is located at the corner of Mills and Courthouse streets in downtown Columbus.