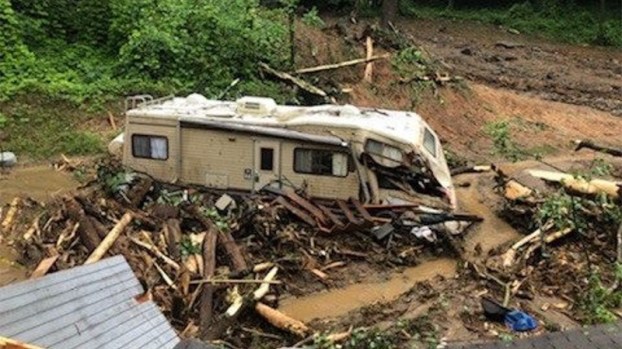 Polk County Emergency Management Director Bobby Arledge showed pictures and gave an update to commissioners on Monday about recent storm damage. Arledge said at least 57 homes were damaged, including five that were completely destroyed after more than 23 inches of rain fell since May 15. (Photos submitted by Polk County government)

COLUMBUS — Recent heavy rains — more than 23 inches since May 15 — have caused damage to 57 homes, five of which were completely destroyed.

Of the 57 homes touched by the  recent disaster, five were completely destroyed, six had major damage, 12 had minor damage and at least 29 others were affected, Arledge said. 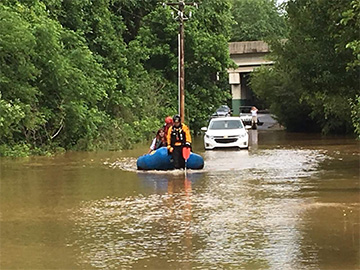 “There’s probably going to be more coming up,” Arledge said. “As of right now, we are still not declared a federal disaster. We are under a state emergency and local, but nothing from federal yet.”

A disaster recovery center has been set up for Saturday from 10 a.m. to 5 p.m. at the Polk County Library in Columbus. The American Red Cross, the North Carolina Baptist Men’s Disaster Relief Ministry, as well as local and state agencies will be present to offer support and assistance for anyone in need.

Arledge told commissioners that officials have reopened all roads that were closed due to the calamity, except for Howard Gap Road from the top of Indian Mountain to 1901 Howard Gap Road. U.S. 176 and Holbert Cove and Green River Cove roads have been completely reopened.

Arledge said there has been a tremendous outpouring of support for the county from state and local agencies, nonprofits and residents offering to help.

“We’ve had over 23 inches of rain since May 15,” Arledge said. “I don’t think we’ve ever had that amount of rain that I can remember. That’s what has caused these slides.”

There were three people killed because of the storms. Patricia Case was killed on May 18 in a mudslide at her home on U.S. 176 in Tryon. On May 28, WYFF journalists Mike McCormick and Aaron Smeltzer were killed when a tree fell on their vehicle on U.S. 176.

Arledge said there were a couple of water rescues during the events: one at Green River Highlands and another on Interstate 26.

Arledge also said the North Carolina Baptist Men are in the county, where they are helping clean up 130 properties. People who need assistance from the agency for their home will need to sign up.

The North Carolina Baptist Men are helping people with yard debris and cleaning out houses with any mud. Another organization, Team Rubicon, from the eastern part of the state, has also arrived for similar help to residents.

“Thanks for all you’ve done,” said Commissioner Ray Gasperson. “Everyone. It’s been phenomenal.”

Gasperson asked about the Interstate 26 damage. Arledge said there is a culvert there.

“There’s a lot of work to be done before we ever recover from this one,” Arledge said.

Polk County Manager Marche Pittman spoke of the damage along U.S. 176 in Tryon.

“Getting out from under this is going to be much more complex than people realize,” Pittman said.

Commissioner Chair Jake Johnson said when he was in Raleigh recently, everybody knew what happened in Polk County and how it was handled.

Saturday’s recovery center is for anyone affected by the flooding or slides. Pittman said several agencies and nonprofits will be on hand to answer questions or offer help, including county officials, the Baptist Men, Vaya Health, American Red Cross, Rubicon and NCDOT.

“We know this whole thing has impacted folks with land and value, but we also know it’s impacted them mentally,” Pittman said. “Somebody will be there to explain the process and what we’re waiting on with FEMA.”

In Polk County District Court on Wednesday, May 30, 2018, with Judge Pete Knight presiding, 179 cases were heard. Some... read more