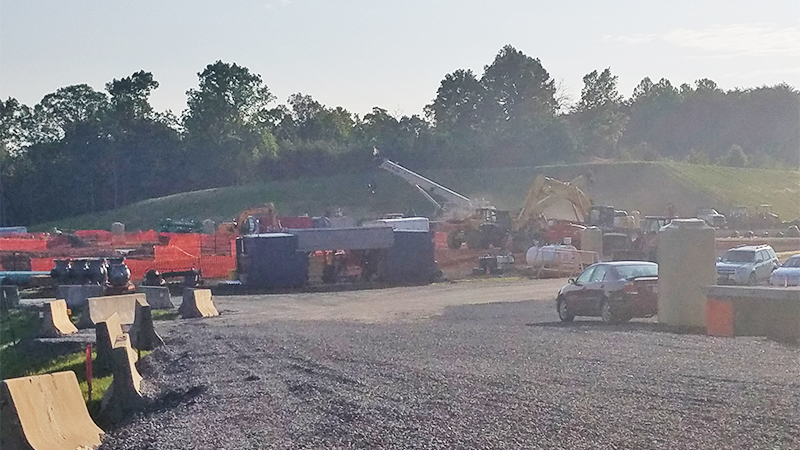 MILL SPRING — PSNC Energy got approval this week to go ahead with its natural gas compressor station currently under construction in Mill Spring.

The natural gas compressor station is currently being constructed off Silver Creek Road in Mill Spring, approximately 1 mile from the intersection of highways 108 and 9.

The application approval comes almost two weeks after the DAQ held a public hearing in Columbus, where approximately 70 Polk residents attended, all voicing concerns about the station.

Polk County Manager Marche Pittman said the county has no regulations for the station because it is being constructed in an unzoned area of the county. The townships of White Oak (where the compressor station is located) and Coopers Gap are not zoned in Polk County.

“The Division of Air Quality has reviewed the air permit application and all public comments received, and determined the proposed project meets all applicable federal and state air quality requirements,” Davey said.

The air permit was signed and issued to PSNC on June 4.

Davey also said the final permit includes two additional requirements that were not in the draft permit based on public comment and DAQ’s further review. Those requirements include that an additional nitrogen oxides compliance stack test is due during the permit cycle, as well as inspection and maintenance documentation regarding the manufacturer’s SoLoNOx nitrogen oxides reduction technology.

During the May 23 public hearing, residents expressed concern over the station’s close proximity to Polk County Middle School. Many residents said they were concerned over the noise the station will make, with DAQ officials saying they could only monitor and approve the permit for air quality standards.

End of the road for DOT’s 108 widening project