End of the road for DOT’s 108 widening project 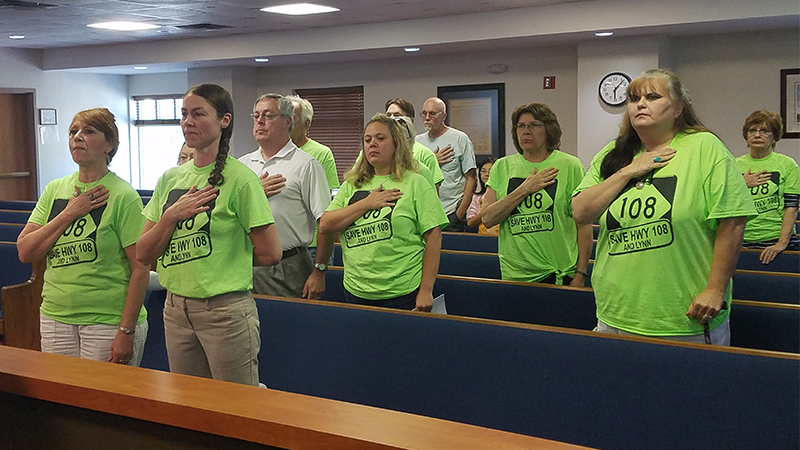 Several Polk County residents attended the county’s Monday meeting to thank commissioners for signing a “No Build Alternative” letter to be sent to the North Carolina Department of Transportation, which should halt the state’s plan for widening Highway 108 between Columbus and Tryon. (Photo by Leah Justice/Tryon Daily Bulletin)

COLUMBUS — What started as a rally in a parking lot grew into a movement that generated a 2,300 signature petition.

Now, county commissioners have signed a “No Build” letter to the North Carolina Department of Transportation, which will stop a project to widen Highway 108 between Columbus and Tryon to three lanes — granting the wish of the large group of citizens who have been vociferous in their opposition to the plan.

Polk County commissioners met Monday and announced they had unanimously signed the letter, prompting several residents in attendance to thank them.

The letter to NCDOT Division Engineer Brian Burch states that the county appreciates the state’s efforts on the Highway 108 project between Columbus and Tryon, but commissioners are not interested in any project for that corridor that cannot be completed within the existing rights of way.

“Therefore, we officially request that you implement the ‘No Build Alternative’ that [has] been communicated to us,” the letter states.

Following the meeting, Polk County Manager Marche Pittman said he has been assured the letter from county commissioners is all the NCDOT needed for the agency to walk away from the project.

“We don’t want to just show up when we need to complain,” she said. “We want to demonstrate that we show up when we support you when you make sure the right thing is done.”

LeRoy said residents in favor of the “No Build Alternative” include business and home owners, attorneys, two mayors and city council members, who have have expressed their “No Build” views through thousands of letters to the governor, NCDOT and state legislators.

“I would like to express once again this community’s sincere gratitude to the North Carolina governor, who was here just last week in Polk County out of concern for our people, and to you the commissioners of Polk County, for practicing the ‘seven generation’ philosophy,” LeRoy said. “We thank you for ensuring our history and place in Polk County will continue to transcend time and that our history and culture will be preserved for future generations to learn.”

LeRoy also expressed gratitude for the group that quickly formed after the NCDOT revealed plans for a three-lane highway on the 3-mile stretch between Columbus and Tryon.

The NCDOT revealed plans  last year to extend the highway to four-lanes, which residents opposed.

In April, new plans were revealed for widening and turn lanes, which would have compromised 16 businesses and six homes. A group quickly formed to oppose the project, whose members sent letters and started a petition that received more than 2,300 signatures from residents against the DOT’s idea.

“Without this community support and without this team, this large movement would not have been possible,” LeRoy said.

LeRoy teared up speaking about the toll the project has taken on affected small businesses and homeowners.

She personally shook the hands of every commissioner, the county manager and county attorney after her speech.

Olivia Whiteside, of Lynn, also thanked the team in opposition for their work over the last five weeks.

Dorothy Easley sent a letter to commissioners, which was read by Tom Brylowe.

“We thank you for putting your community’s values above the values of outsiders who seek to pave across our extraordinary county and people,” Easley said.

There were 11 residents who spoke to thank commissioners for sending the “No Build Alternative” letter to the NCDOT.

Commissioners also came to a consensus for its appearance commission to research getting the 3-mile stretch of Highway 108 designated as a scenic byway.

Becky Oliver told commissioners she knows they have been through about as much as the residents have about what to do or not.

“I just want you to know we appreciate you, as our commissioners, listening to us,” Oliver said.

She and several others volunteered to work with the appearance commission to get the highway designated as a scenic byway.