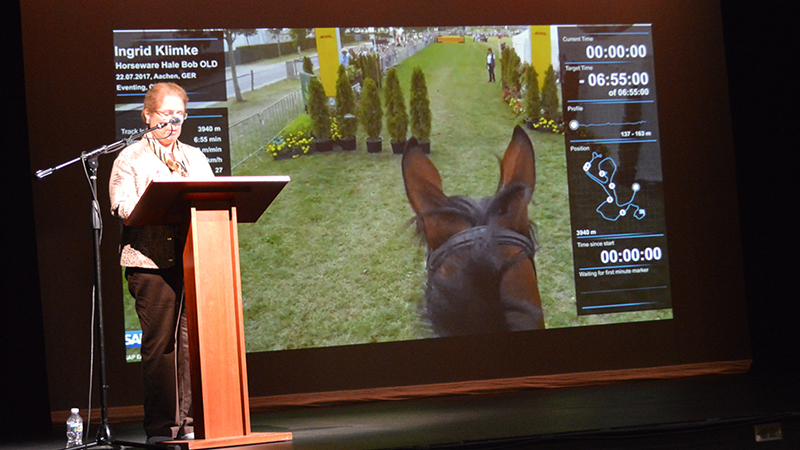 TRYON — “Oh! Wow! That’s a skinny!” came the comments from the audience as they watched a video from a camera mounted on a cross country rider’s helmet.

“Even if you don’t know much about horse sports, you can still enjoy this event,” Freeman said about several of the disciplines.

She described the vaulting as gymnastics on horseback, dressage as horse ballet and eventing as a “very dangerous” sport.

Freeman showed videos from several past Olympic and WEG events. In addition to the helmet camera video that thrilled the audience, she showed an inspiring video of a Para-dressage rider with no legs and one of a rider with no arms, who held the reins in her teeth.

Freeman commented about the size of the vaulting horses. Most vaulting horses are drafts, Warmbloods or draft crosses, and therefore usually stand well over 16 hands.

“If I was jumping on and off a horse, I’d want something shorter,” she said to a ripple of laughter and agreement from the crowd.

In addition to showing the videos and talking about the different disciplines, Freeman gave some basic information about how they were judged and about the horses themselves. She stressed that the Fédération Equestre Internationale was very strict with their no drugging horses policy, and was also very careful to ensure the horses were sound and healthy.

“The FEI has zero tolerance for drugs in the horse’s system, and when they say zero, they mean zero,” she said. “Because of that, each team travels with their own vets, massage therapists and chiropractors. [The horses are] very well cared for. ”

The presentation was the second of the WEG talks that took place at TFAC, which were sponsored by TR&HC and the Tryon Fine Arts Center. TIEC Chief Operations Officer Sharon Decker was on hand to answer some of the audience’s questions.

Decker said Olympic Gold Medalist Capt. Mark Phillips designed the cross country course, which is titled “A jump through the Carolinas,” and features jumps to commemorate notable places in the region. Decker also assured the audience that tickets are still available for all the events.

TR&HC President Andrew Brannon said the first two talks were so successful, they are considering holding more presentations between now and WEG, which takes place Sept. 11-23 at TIEC.