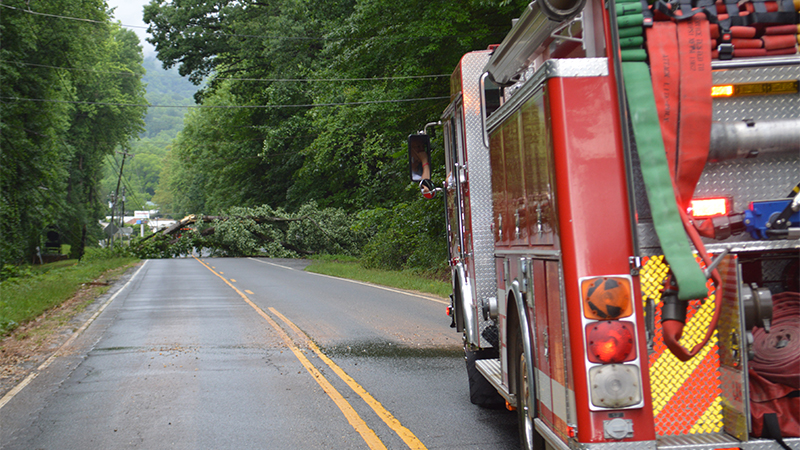 Landrum Fire and Rescue trucks block Highway 176 between Landrum and Tryon Tuesday afternoon as they await Duke Energy crews to remove a tree that fell across the road. (Photo by Catherine Hunter/Tryon Daily Bulletin)

LANDRUM — Traffic was blocked and power, internet and phone service were out for several hours Tuesday afternoon between Landrum and Tryon.

A tree fell across Highway 176 between the Harvest House Restaurant and Henson Collision and Towing, taking out power lines to several houses in the area.

Landrum Fire Chief Warren Ashmore said the large tree fell around 3:20 p.m. Rescue workers parked fire trucks in the road to block traffic from both directions, as Duke Energy crews worked on another tree that had fallen on Ridge Road at 3:05 p.m.

Ashmore said, with as much rain as the area has experienced in the last two weeks, falling trees are a real hazard. It was a falling tree that hit a car on Highway 176 between Tryon and Saluda, which killed two journalists with Greenville’s WYFF News 4 on Monday.

“Anytime there is this much rain for this long, people need to be aware,” Ashmore said. “These trees do not have a deep root base.”

The tree that fell between Landrum and Tryon Tuesday was at least 3 feet in diameter and several stories high. It took down power lines along the south side of 176 and loosened the lines stretching across the road. Two power poles tilted at an angle, which looked as if they could fall at any moment.

Already stretched thin from dealing with other areas of the county hit hard by storm damage, Duke Energy crews were on the scene before 6 p.m. to begin working on the power lines. However, the chainsaw crew was still working on the Ridge Road tree as late as 6 p.m.

Rescue volunteers said they were unsure how much longer it would take to get Highway 176 clear. As cars used a nearby driveway to turn around, rescue volunteers stood in the rain redirecting traffic back to Hearthstone Ridge Road and Lanier Drive. An 18-wheeler attempting to deliver cars to Stott’s Ford in Tryon was stranded on the road for several hours, waiting as crews worked to clear the way.

Keeping watch over the heart of Polk County