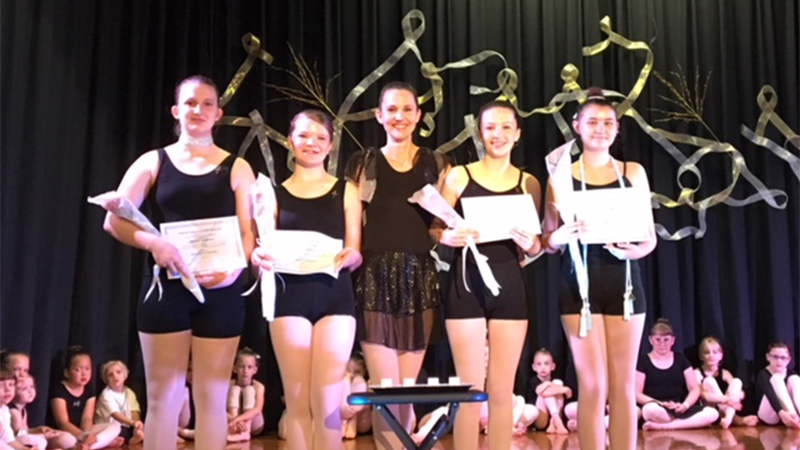 Four students were inducted into the National Honor Society for Dance Arts on Saturday, May 19, following the eighth annual Spring Concert for The Dancer’s Extension.

Kennedy Huddleston, Autumn Jones and Clara Monts were inducted at the junior level, while Bret Snider was inducted at the secondary level. The concert and the induction ceremony took place in the auditorium of Saluda Elementary School, and were held in conjunction with the Saluda Arts Festival.

The NHSDA is a program sponsored by the National Dance Education Organization based in Silver Spring, Maryland.

The Dancer’s Extension hosts a chapter of the NHSDA recognized throughout the United States.   The primary mission of the NHSDA is to promote and honor outstanding achievement in middle and high school level students for academic excellence, leadership and artistic merit.

Current dance students who are at least 11 years old may immediately begin working towards induction into the society. Inducted students may participate in special events throughout the area, list their achievements on resumes or college applications, be recognized at graduation ceremonies and compete for awards and scholarships.

Through their work in dance, academic achievement and service to others, these students join other current members across the United States. New inductees were presented their certificates, signed by NDEO Executive Director Susan McGreevy-Nichols and by their instructor Sonya Monts, then pinned with the golden dancer emblem of the NDEO during the May 19 ceremony.