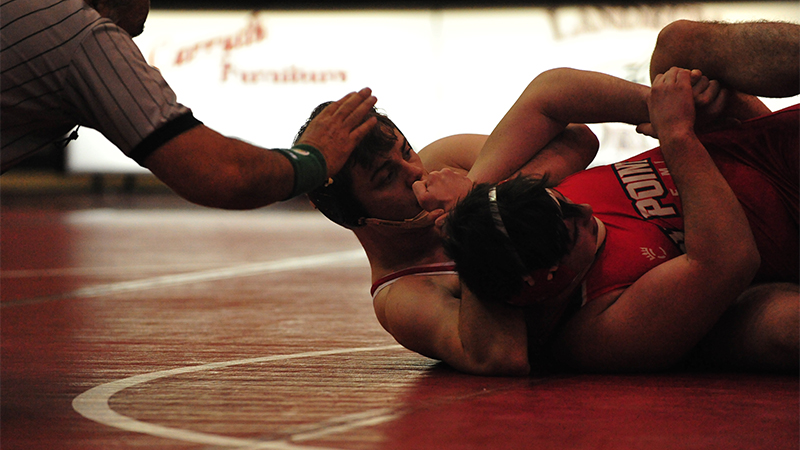 Landrum senior Paul Zimmerman (left, pictured in a December 2017 meet against Blue Ridge and High Point) is the 2017/18 state 195-pound 1A/2A runner-up, after winning all of his state championship matches last weekend at Anderson,. His sole loss came in the final round against defending (and current) state champion Kesean Brown, of Bamberg. (Photo by Mark Schmerling)

Landrum senior Paul Zimmerman has improved steadily in wrestling — so much so that, on Friday and Saturday, he won every wrestling match at the state 2A tournament, except his last.

After the tournament, Zimmerman was named SC NC Realty Athlete of the Week for the Cardinals.

Cardinals fans would have been overjoyed if Zimmerman’s twin brother, John (wrestling at 220 pounds), also received state honors, but the latter had to forfeit matches due to an illness.

Also competing in the state individual tournament for the Cardinals were Justin Howard (170 pounds) and Matthew Turner (182).

In the championship round, Paul Zimmerman lost to defending (and now current) state champion Kesean Brown, of Bamberg.