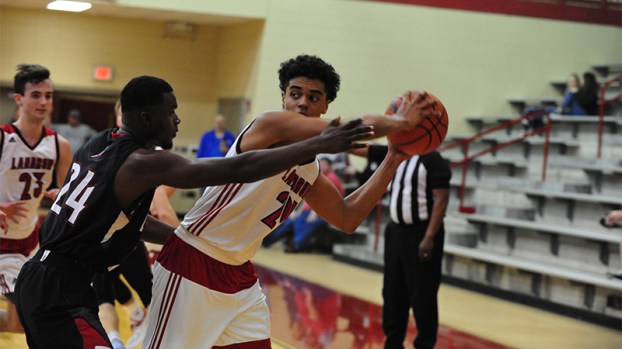 When All-State players Trey Smith and Foster Bridges, and the team’s cast of supporting players, are on, the Landrum Cardinals prove a tough challenge to overcome.

That was the case Wednesday evening during the first round of the state basketball playoffs, as the Cardinal men fought off the visiting Liberty team to emerge with a 72-56 win, which earned the Cards a spot in Saturday evening’s second-round game against Keenan, also at Landrum High.

Landrum entered the Liberty game with a 20-4 overall record, and a Region 1-2A title, while Liberty entered the Landrum gym with a 6-7 overall record. The Red Devils played much better than their record might indicate, however, constantly threatening to catch the Cardinals, until the winners pulled away near the end of the game. 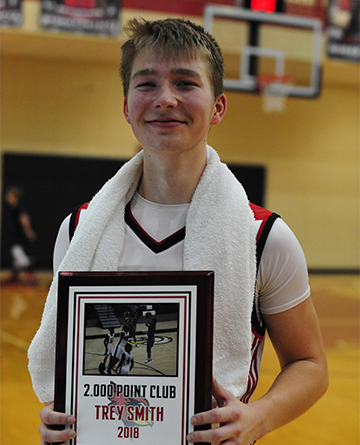 Landrum’s junior guard Trey Smith poses with the plaque he received after scoring 30 points (he now has 2006 in his varsity career) Smith is the all-time Cardinal scoring leader. (Photo by Mark Schmerling)

A Bridges layup gave the Cardinals an almost instant two-point lead. Between them, Bridges (23 points on the night) and Smith (30 points, to raise his Cardinal scoring record to 2006, as only a junior) scored nearly every point for the Cards in the early going.

In all, Landrum took a 7-0 lead to force the Red Devils into playing catch-up. After one quarter, the Cards led 18-10, and managed to outscore the Red Devils by two or three points in each successive period.

In the second half, the Cardinals employed multiple defensive strategies, Smith pointed out.

“That’s why we have a good basketball team,” he said.

The contest also featured a number of blocked shots

In the fourth quarter, Landrum played out the clock until they led 69-53 with just 29.8 seconds remaining. At that point, Smith pulled his starters, with replacements adding to the Cardinals’ lead.

After the victory, Trey Smith was honored with a post-game plaque naming him the first member of Landrum’s 2,000-point club Lyn Smith noted that it felt good to know that one of his players — and his son — earned that honor.

Foothills Gymnastic team vaults to the top at competition