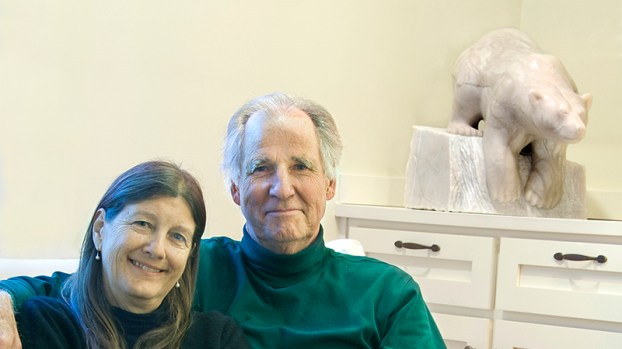 “That grouping took most of 1999,” says Dale. “Polar bears are a cause for us. Our last vacation was to see the polar bear congregation on the early ice in Churchill.” (Photo by Vince Verrecchio)

A love story in stone

I first met Dale in 2015 standing by his gorilla bust at a Tryon Painters and Sculptors’ show,” recalled Loti Woods. “He called the work “Enigma” and I could not imagine how he brought such life to the eyes. We talked as if we had already known each other a long time. Eight days after our first date, Dale proposed and gave me a gift for the occasion.” Loti showed me a delicate, life-like sculpture of baby sea turtles pulling free of the sand.

As I talked with her and her husband, sculptor Dale Weiler, and got to know them, I perceived a touching symbolism in the engagement gift. Both had lost spouses and were getting accustomed to the idea of being alone when they found each other, and as Loti explained, “finding new love in our 60s was a new life.”

They waited five months before getting married. As a wedding gift, Dale gave Loti “The Love Knot.” It had taken him four months to bring the sculpture of the mother and baby elephant to life with entwined trunks and heads made of steatite, Dale’s favorite stone, and a tusk of alabaster.

“After the marriage I wondered what were we going to do now?” Dale’s emphasis was on “we.” “Sculpting was my joy and I loved it. For a year and a half after my wife’s death, it was my healing. But then it felt like my art was getting stale. Both Loti and I were looking for a new sense of purpose.”

Dale and his brother grew up together hunting and fishing and loving the outdoors. Their father was a professional sporting painter and schoolteacher who counseled his children not to become artists. Dale’s brother and his siblings heeded the advice. Dale procrastinated with a master’s degree in aeronautic systems, working on a thesis at NASA, flying Navy jets, matchmaking technical companies as a consultant with Arthur D. Little, and finally owning a strategic consulting firm. It was 1989 when he finally took a sculpting class and discovered he could feel and see a trout inside a stone. “I can’t explain…I see wildlife in the stone, in 360 degrees, and work to free and preserve it … taking away what’s unnecessary.”

Today, 15 of his 70 wildlife pieces are in museums and many with private collectors.

Loti has early memories of bringing home critters that other girls thought were icky. She read books such as “Call of the Wild” to take her on wilderness adventures. She never thought much about art, preferring the outdoors to a museum. A degree in special education directed her path until finding an interest and talent in the specialized business of hard-to-place property insurance in areas at risk from hurricanes and other natural threats. She sold her own business after a number of years and moved to Tryon.

“We both had a passion for the outdoors and learning about wildlife,” Dale continued. “We found our new sense of purpose by forming Weiler Woods for Wildlife…using my art to bring awareness and funding to wildlife conservation causes. Loti brings her organizational and sales skills, making contacts with organizations, and creating our marketing tools.”

“I was able to see ‘Hellbender’s Rock’ evolve from a 200-pound stone into an icon of a rare species of giant salamander,” says Loti. “It was exciting photographing each step and fun to hear Dale talking to it, coaxing it along. It will always be a reminder of the start of our new journey together.” The sculpture will be installed on May 8 as a focal point at the renovated Hellbender’s exhibit at the North Carolina Zoo in Asheboro.

Money from the sale of an elephant sculpture, “Fractured Existence,” was also donated to the zoo’s elephant enrichment program. Net proceeds from the sale of “Cliff Hanger” went to bat conservation. I gestured to a realistic fruit bat to the right of the living room fireplace. “How many bats have you done?”

Dale remembered eight fruit bats and microbats. “I often get focused on a species. Wanting to draw attention…creating a passion that leads to education, a better understanding and appreciation, and ultimately involvement of time and money.”

On the left of the fireplace, a lone polar bear lumbered down a block of ice onto a cabinet top. On the coffee table at my knees two polar bear cubs sprawled on their sleeping mother. Dale explained, “Before touching stone, I studied books and watched videos to understand how polar bears move. That sculpture grouping took most of 1999. Polar bears are a cause for us. Our last vacation was to see the polar bear congregation on the early ice in Churchill. She took photographs from 20 feet away.”

As he talked, I immediately knew that safety goggles are essential and much breathing was through a particulate respirator. It’s a dusty art with pneumatic grinders and saws spraying debris at enough decibels to mute a dentist drill. A hammer drill bores holes 1.5 inches apart, horizontally and vertically, targeting to meet at coordinates hidden in the stone. A feather wedge is driven into each hole. A final blow hopefully cracks the stone between the holes to free the pieces between. Hand tools such as a jeweler’s file and 1,000 grit sandpaper on the tip of an eighth-inch diameter dowel continue the search for the wildlife that Dale is certain of finding.

“Every stone has personality,” says Dale. “I’ve learned to test for fault lines by the tone of a steel rod tapped on the surface. But faults can provide unforeseen improvements. Even when I get to polishing and seal coating, there may be surprises. I’ve learned to flow with what the stone wants to give me.”

For Dale and Loti, their sense of purpose in 2018 focuses on the NC Zoo and the WNC Nature Center in Asheville. Dale is studying red wolves, knowing that examples of this rare species, found wild only in North Carolina, await discovery in at least a few of the stones in his stash of steatite, marble, granite, alabaster, and other blocks and slabs.