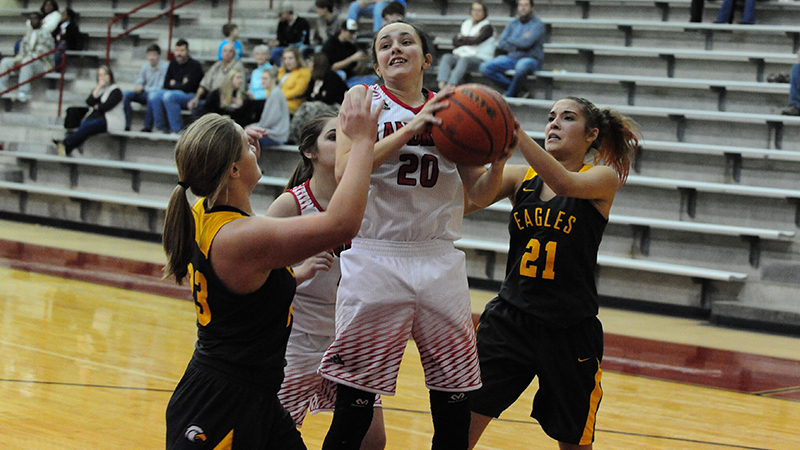 Makena Israel fights to keep the rebound she brought down late in the Chesnee game. (photo by Mark Schmerling)

Only early in the second quarter did the Eagles have any chance, as the Cardinals suffered a short lapse in overall intensity. At that, the winners led 21-10 after the first period, and 33-19 at the half.

The Cardinals’ Lindsey Hardin led all scorers with 21 points, including four three-pointers.

“We have a tendency to hit cruise control a bit early,” admitted Landrum head coach Deon Brice, whose preference is to play hard for the entire game, and give opponents no chance. That the Cardinals did for most of the game’s 32 minutes, whipping the Eagles, 15-7, in the third quarter, and outscoring them, 16-12, in the final period.

“We’ve got veterans,” Brice explained, but we’re still young. “They (the Cardinals) came out and tried to do too much. Though Brice will lose a few veteran players, many are returning, and for nearly all the time, they’ll play hard, with focus.

“That’s all I ask them to do,” Brice said, “is play hard.” He knows that the score will take care of itself.