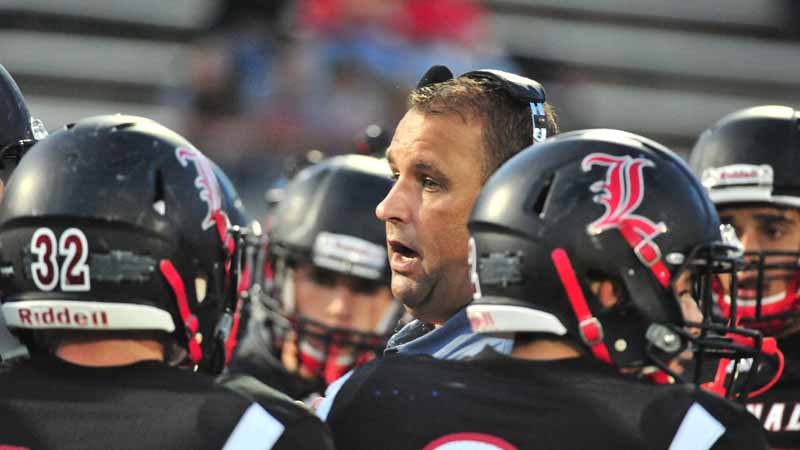 Landrum played with eight starters out but played as hard as anyone could expect against a highly athletic and talented team, and never quit. But when the fourth quarter ran out, Walhalla left Cardinal Stadium with a 51-0 win on Friday evening, Sept. 22. The Cardinals are 1-4, all against non-region opponents. 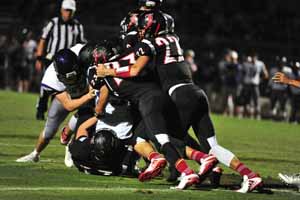 Both teams displayed excellent defense, but the Razorbacks, now 5-1, capitalized on their size and speed and forced a few turnovers. A 44-yard field goal only rubbed salt into the wound.

After the game, Cardinal’s head coach Jason Farmer told his team, which will meet its first region rival Chesnee this Friday, Sept. 29 at Landrum, “As far as I’m concerned, we’re 0-0, with Chesnee coming next week.”

“We can’t take anything from a 51-0 loss,” Farmer remarked after the game. Pleased that his team once again played hard, and with heart, Farmer added, “We’re going to qualify for playoffs. I’m proud of my kids,” but admitted, we’ve got to get better.” 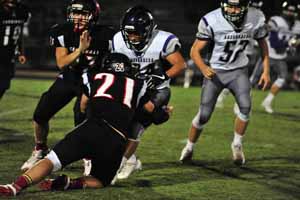 Landrum’s Ryan Flynn (#21) is about to take down Walhalla’s Gavin Holbrooks (#24). Walhalla tripped the Cards, 51-0. (Photo by Mark Schmerling)

Walhalla quarterback Chris Meadors proved a double threat, throwing and running for Razorback scores. Cardinal QB Michael Clark also completed some of his throws, but the Walhalla defenders kept Landrum receivers out of the end zone. For the Cardinals, Austin Hutchins fought for numerous modest running gains, and one long gainer.

This Friday, Chesnee, the Cardinals’ first region rival, comes to town for a 7:30 p.m. opener.