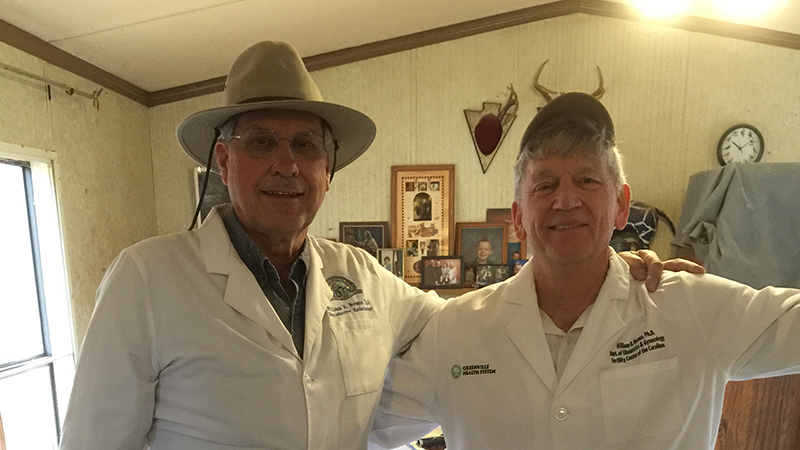 Foothills Housing Partnership Executive Director David Graham works on the floor of a Tryon bathroom that was destroyed by a leaky shower. (Photo submitted by David Graham)

Organization provides emergency repairs for the handicapped, those who can’t afford it

Wynona O. Joye calls her new ramp a “life saver.” Joye, a Columbus resident who can’t walk, relies on her wheelchair to get around. Until Foothills Housing Partnership (FHP) built a ramp for her house, Joye was completely housebound. Now she can get out to church, to the mailbox and visit her husband’s grave.

Yet without new volunteers, FHP will have to close and this wonderful work to help those in need will end. 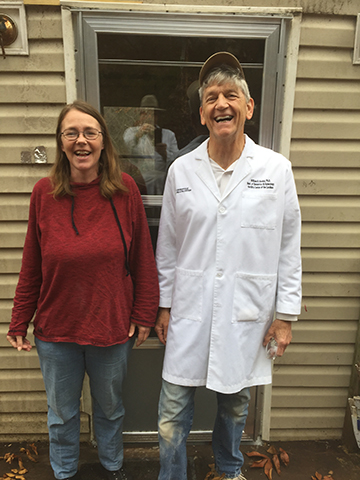 Chrystal Dalton (left) poses in front of her repaired mobile home with Bill Boone (right) of the Congregational Church of Tryon. Boone volunteered to help with the repair work through the Foothills Housing Partnership. (Photo submitted by David Graham)

Foothills Housing Partnership is a nonprofit organization that helps Polk County residents who need emergency repairs to their homes and either can’t make the repairs themselves or can’t afford to have the work done. Started in 2008 by FHP Executive Director David Graham as an outreach ministry for the Tryon First Baptist Church, the partnership has helped numerous people in Polk County.

A new shower for a Tryon resident in need built by Foothills Housing Partnership Executive Director David Graham. The partnership is in desperate need of volunteers to help with emergency home repairs for Polk County residents who can’t repair their homes themselves. (Photo submitted by David Graham)

Graham got the idea from fellow church member, Joel Wray, and at first, drew most of their volunteers from churches across the state. Then, in 2010, most of those volunteers decided to start similar organizations in their areas, leaving Graham to work primarily on his own. He said what started out to be helping people on the weekends has become a six-day a week job. While he occasionally gets help from church members, and the church is able to make a small financial contribution, Graham does most of the work by himself.

“He [Graham] gave up a high paying lucrative job as an engineer to do this as an unpaid volunteer and pays a lot of the cost out of own pocket,” said Foothills Housing Partnership Secretary Barbara Batchler. 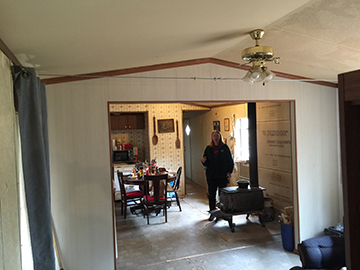 Chrystal Dalton shows off the new ceiling in her Mill Spring mobile home that volunteers from the Foothills Housing Partnership repaired for her. Dalton is just one of the many in Polk County who need help with emergency repairs to their homes. (Photo submitted by David Graham)

At first Graham found people in need by word of mouth. Now Graham, Batchler and the FHP board of directors work with Thermal Belt Outreach Ministry and DSS to qualify those in need. “We help a lot of people who are on disability, public assistance, are elderly or in wheelchairs,” he said.

Thermal Belt Outreach Ministry let Graham know about Mill Spring resident Chrystal Dalton’s need for a new roof. Dalton, a single mother with a 13-year-old son is only able to work part time and could not afford the repairs to the roof of her mobile home. Graham enlisted Bill Boone from the Congregational Church of Tryon to help rebuild the roof supports and replace the insulation.

“The roof would have fallen in eventually,” said Dalton who explained she didn’t have anywhere else to go and would have been homeless with her son. “The roof is leak free and its much warmer in here now.”

Frances Anders is a Tryon widow who had what she thought was a simple leak in her shower. “I was scrubbing the tile and the whole wall fell in,” she said. “The floor was all rotted out under the commode and the shower. The whole backside of the house would have caved in before long.”

While these are just a few of those Graham has helped over the years, the need is great. He said in addition to the desperately needed home repairs the FHP board would like to begin building affordable housing in Polk County and has applied for a grant with the Polk County Community Foundation.

However, if they don’t get volunteers they will have to stop all efforts, including the emergency repairs, until they can increase funding and hire contractors to do the work. Graham said though they could really use men with carpentry, building or plumbing skills, anyone can actually help with other jobs such as carpenter’s helper, painting or even handing tools to the workers.

“Any time people can offer, one or two days a week or a month, even a day or two a year would help,” he said. Anyone interested in volunteering or donating to FHP can contact Graham at 828-429-3822 or dgraham@charter.net.