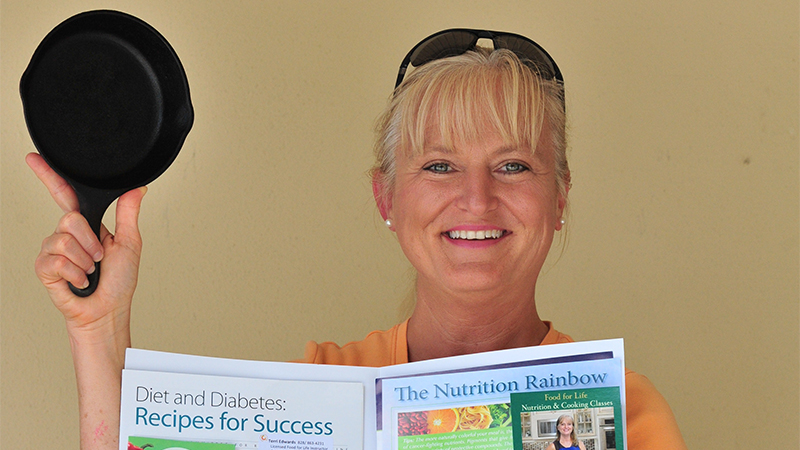 Aching, swollen joints, sleep loss and lack of energy, were among the symptoms that plagued Terri Edwards from her mid-30s through mid-40s.

Edwards now teaches how to prepare delicious plant-based recipes, which gave her a ticket to a life filled with energy, painless joints and a trimmer and more confident self.

Each class includes a short nutrition video lecture by Dr. Neal Barnard, discussion, educational handouts, all within a supportive setting. Each class is followed by an optional 30-minute cooking demonstration, with free samples of three recipes.

Before finding her salvation in a plant-based diet, with carefully chosen ingredients, “I wasn’t getting any better,” Edwards recounted. “All I got was prescriptions.”

She tried several different diets, with no real relief.

Then, her daughter asked her to watch the documentary “Forks Over Knives,” where physicians spoke of chronic diseases, and of The China Study (featured in the film, and funded by the National Institutes of Health). “The China Study,” a book by T. Colin Campbell, studied the relationship of diet and disease.

The film was convincing, according to Edwards. “I decided to give the program four weeks. When I try something, I jump in with both feet.”

Soon, Edwards tossed out much of her refrigerator’s contents.

“I was concerned it was the food I had in my kitchen that was making me sick. That was four and one-half years ago,” said Edwards, who is a now a confident bundle of energy.

“I feel better now than I did in my 20s. My eyes got better,” she recounted adding that her blood pressure became lower. “I never realized it (diet) was all tied in before.” 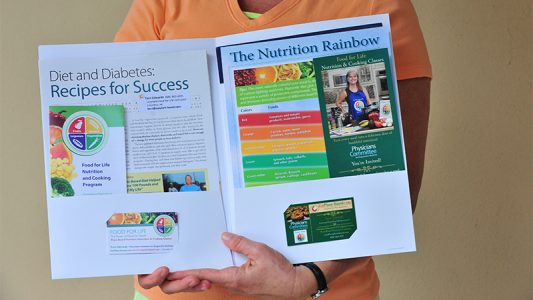 Edwards’s experience launched her into research on diet. She took classes online from Cornell University. Then, she applied to the Physicians Committee for Responsible Medicine, to teach their program—the program she’s now teaching at Tryon Seventh-day Adventist Church.

The Physicians Committee for Responsible Medicine began in 1985, with seven physicians. It now includes over 12,000.

Edwards’s previous experience was similar to that of so many Americans, whose physicians didn’t have the resources for plant-based nutrition. Carrying the ball, “I became their resource,” Edwards said.

Short-term inflammation, such as that resulting from a wound, is natural, Edwards noted, but she added that inflammation that lasts for months or even years, is not so natural.

Edwards said that much early plant-based diet research was carried out by the Gibbs Cancer Center’s Survivorship Program in Spartanburg, directed by Stacy Kindall.

“Now I teach there on a regular basis,” Edwards said. “That led me to teaching at New Horizons Women’s Center (in Asheville), Pelham Medical Center (in Greer) and Wofford College.” She has also taught the program to medical groups at Virginia College of Medicine and Spartanburg Women In Medicine (SWIM), and taught a class for physicians at Greenville Hospital.

During her healing process, someone suggested she start a blog. Edwards did, and it has recorded as many as 57,000 views in one month.

“I’m able to share my passion, not only with family and friends, but with people who read the blog.”

Edwards pointed to a study conducted in the 1950s by the national Institutes of Health, in which autopsies were performed on soldiers killed in war. Many of the victims were in their early 20s; all were physically fit. However, the difference in findings between American and Asian was striking. Some 77 percent of American soldiers were found to have “gross evidence” of coronary heart disease, compared to under 10 percent of Asian soldiers. The obvious difference was diet, and at a time well before widespread fast-food options and the explosion of packaged foods.

Now, said Edwards, two of three 12-year-olds examined in the U.S. have beginning stages of cholesterol damage in their arteries.

Edwards related that at age 19, while she weighed just 110 pounds, her cholesterol was in the 220s.

Diet is like so many other facets of life, with Edwards noting, “People don’t realize the power they have. What’s hanging on the end of your fork can have a huge impact on whether you develop a life-threatening disease.”

The rise of factory farming, where most livestock does not graze in pastures, has left many Americans with out-of-balance levels of Omega 3 and Omega 6 essential fatty acids (EFAs). While that ratio should be 1:1, Edwards said, many Americans could discover that, in a large sense, they are what they eat, with that balance being tipped well toward Omega 6s.

Edwards is out to dispel myths such as not being able to obtain sufficient protein and essential nutrients from plant-based diets. In fact, she said many professional athletes, performing at the highest levels of competition, do so, and do it well, on such diets.

She also tells students that their kitchens and pantries already contain many or all spices and flavorings needed to make meals taste good. Simplicity in meal preparation is important.

Tasting good “is the key” Edwards noted. Her classes will help individuals realize that plant-based food can be healthful and tasty (and a good source of calcium and protein), and that such a diet costs less than one relying on animal-based protein.

“I love to grill out,” Edwards said. One of her favorites is portobello mushroom burgers, which she refers to as “plant-based rib-eye.”

Edwards’s advice to students and others is “eat the rainbow,” meaning include all colors of food, to receive vital phytonutrients.

Edwards teaches how to re-stock one’s kitchen or pantry (if necessary) with spices that will add flavor. She also teaches how to make fast meals that are healthful and tasty, how to order in restaurants, and how to read nutrition labels.

Edwards noted that after taking her classes, many find they can eliminate or reduce their use of prescription medications, have fewer (or no) migraine headaches, and often sleep better.

“We call it, ‘food is medicine,’ because it is,” Edwards remarked.

“I’m passionate about what I do,” she said. “It’s changed my life. I want to help others.”

To register for classes, visit www.EatPlant-based.com

One injured in Thursday wreck