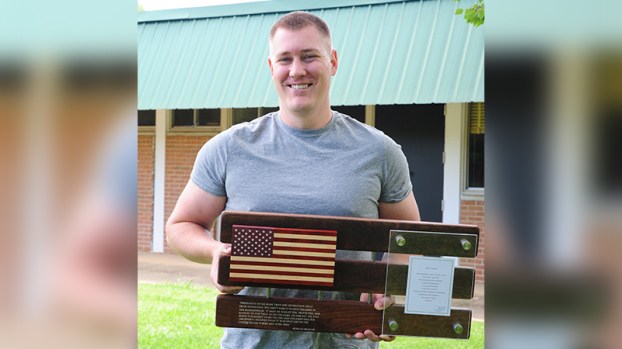 Honoring the service of others through art

Combining creativity with patriotism provides good background on the woodwork of  Tryon’s Nathan Smith, some of which is included in an exhibit that begins this Memorial Day weekend at Tryon Arts and Crafts School, adjacent to Harmon Field.

The show is named “Lost Loves” and runs through July 7.

A fourth-generation Army veteran, whose great-grandfather served in World War I, Smith politely emphasized that while he lost a leg and also suffered head injuries in a duty-related motor vehicle collision, he is not a combat veteran.

An Army brat, who was born at Fort Benning, Ga., and who traveled over much of the U.S. map, Smith said only one school he attended had a wood shop, but that shop made a lasting impression on him.

“I just got into wood working,” Smith admitted. “I went into drafting and design. I wanted to get into architecture.”

At home, Smith must work around the schedules of his young children, but is in the process of moving his shop from basement to garage, a switch that will better enable him to move his larger work out the door.

“The only problem with the basement,” Smith noted, “is if I build something too big, I can’t take it out.” 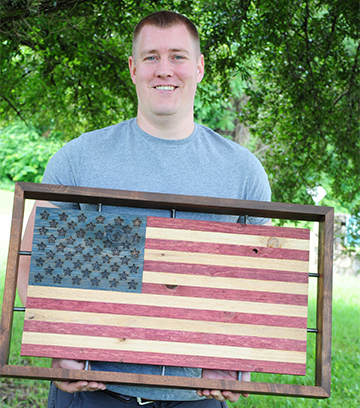 Smith created one of his first wooden pieces as a gift to, and to honor, his father, a long-serving Army veteran. It consists of an American flag, a photograph of Smith and his dad, and a quote by President Ronald Reagan: “Freedom is never more than one generation away from extinction. We didn’t pass it to our children in the bloodstream. It must be fought for, protected, and handed on for them to do the same, or one day, we will spend our sunset years telling our children and our children’s children what it was once like in the United States where men were free.”

“I designed it to honor the service of my father and me,” Smith explained. “It had meaning,” as all four generations of his family served in the Army.

Subsequent and nearly identical pieces are in the “Freedom is Never Free” series, limited to ten pieces. As with the original, the various components are fixed to three pieces of wood. On these pieces in the series, Smith notes, “Born to Freedom.”

“Freedom is a word, a concept, an idea, a belief that is easily lost in time though ignorance and complacency. The memory and sacrifices that so many have given to fight for, to protect our loved ones, our friends, our countrymen, may we never take for granted, may we never forget,” explained Smith.

“I believe in the country,” Smith said of the United States. “I’ve always understood that freedom isn’t free.”

Another of Smith’s creations is the Eisenhower Series— a large wooden red, white and blue American Flag with 50 stars. Dwight Eisenhower was the first president in office when the flag went from 48 to 49, and then to 50 stars, to represent the then-new statehoods of Alaska (49th  state) and Hawaii (50th). These flags are held in wooden frames.

For his shop, “the one thing I wanted was a flag,” he said. Rather than simply making a two-dimensional representation, Smith gave it depth, to create shadows. “I wanted it for my shop, my shop alone. My family members loved it.”

Smith enjoys both design, and creation.

“When I was in school,” he remembers, “I kind of shadowed a high-end kitchen and bath outfit. I got to do the design . . . I really enjoyed that, but it was missing something. I just don’t enjoy computer drafting. I enjoy hand-drafting.”

As someone who lost a major limb, and now uses a prosthetic replacement, Smith asks, “Do you want a crutch, or do you want to move forward?” It’s clear that he is moving forward, and has longer-term goals.

“My plan is to get into furniture. Everything I’ve done, I’ve designed myself.”

“If I’ve had any problems, those people have helped me out tremendously.”

Choosing various species of wood for his projects represents another learning curve.

“There’s a lot to learn between wood.”

Smith’s woods of choice are walnut, maple, mahogany and cherry. He sources his wood in part from Apple Country Woodworkers (which sells donated wood) and one other source. Smith said his shop contains wood representing some 20 species, but admitted, “I’m afraid to work with two-thirds of them.”

Smith also admitted, “I really don’t have a straight path,” but added, “I really enjoy what I’m doing. The whole idea of coming up with something and using your hands  . . . you get to see the beauty you just created.”

Remembering sacrifices made by area veterans

Saturday, May 27 Starting at 9 a.m. the VFW Post 9116 will be setting out approximately 400 flags on veterans’ burial sites. We... read more