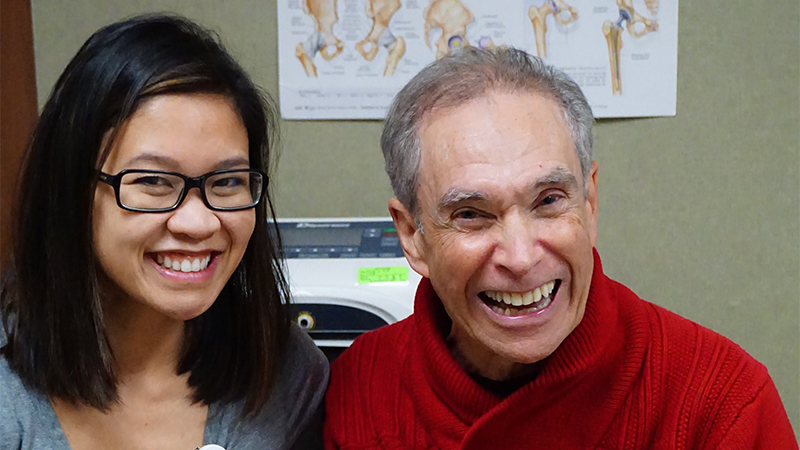 Allan Kroland strode down the hallway in the new rehabilitation building at St. Luke’s Hospital looking as though he was intent on vaulting into the ring and knocking out his opponent in the first round.

In fact, Kroland noted, “This is going back into the ring. Once my mind is set, nothing will get in my way.”

For Kroland and many others, the main opponent they are facing is Parkinson’s Disease.

But thanks to the efforts of researchers and the Foothills Parkinson’s Support Group, those local patients have a new weapon in a special therapist and a new course of therapy.

Kroland’s therapist, Hanna Nguyen, DPT recently attended a workshop to learn a comprehensive, research-based program that uses exercises to combat the effects of Parkinson’s Disease. And thanks to a donation by the support group to St. Luke’s Hospital Foundation, Nguyen received further training at a Parkinson Wellness Recovery Course in Tucson, Ariz.

Nguyen is now a disciple of Dr. Becky Farley, who developed the Power Course of therapy to help Parkinson’s patients like Kroland vault into the ring.

Farley developed the gold standard program, according to Richard Kennedy, who, along with his wife Dot, heads the Foothills Parkinson’s Support Group, which meets regularly at Landrum Library to learn and share information on improving life with Parkinson’s.

“I recognized the value of it,” Kroland noted of Farley’s and Nguyen’s therapy, “not only for me, but for the community.

In finding the necessary funding to help train Nguyen in the program, Kroland reached out to the community, “and Richard and Dot Kennedy stepped in. I’m thankful for the Foothills Support Group.”

Replied Richard Kennedy, “We were fortunate enough to have enough funds.”

Though Richard and Dot do not have to deal directly with Parkinson’s, the disease has struck members of Dot’s family. As directors of the local support group, and from personal experience, they know what patients require. Fundraisers and donations support the group’s efforts.

“The great thing about it is the benefit. The only thing we have is exercise. These exercises are the foundation,” Kroland said.

Kroland, who is also a drummer, and someone who incorporated various exercises into his life, had become aware of Becky Farley’s research and decided he would like to have a therapist who practiced that program. Kroland said he approached Scott McDermott, director of physical rehabilitation at St. Luke’s. Then, the Kennedys’ support group was able to provide funding to help Nguyen get training.

The Power Program features four big moves each while the patient is standing, sitting, on all fours and lying down. Nguyen notes that the moves incorporate a flow and a rhythm.

“It responds to the Parkinson’s brain, actually to anyone’s brain,” she says, teaching sweeping moves.

Nguyen said she likes “to hit the ground running.” Her program, based on Farley’s research, devotes three weekly sessions of 45 minutes each for some patients. Frequency of therapy is important, she noted, as patients have a lot to learn to incorporate the movements. Frequency helps them learn more thoroughly.

Understanding that Kroland seemed to light up during his therapy, Nguyen added that when patients exhibit that kind of enthusiasm, “It really lights me up, too.”

Knowing that exercise helps the brain create dopamine, the neurotransmitter, the deteriorating production of which causes Parkinson’s, Nguyen remarked, “Any time the brain can create its own dopamine, it’s important.”

Nguyen has two patients whose protocol includes power moves. She incorporates a lot of the basic moves and patterns with several of her other patients.

The program also works, she noted, with patients who have other disabilities.

“Allan has such incredible drive and motivation,” Nguyen noted of her patient, and said that becoming trained in the Power course was “a game changer” for her.

“I’m thrilled to work with the patients.”

About the Foothills Parkinson’s Support Group

As a special feature during Parkinson’s Awareness Month, that group will meet at the Landrum Library on April 19, with Nguyen speaking about her program at St. Luke’s, and how Parkinson’s and other patients respond positively to it.

Plans for a May picnic at the park in Landrum will be announced at the April meeting.