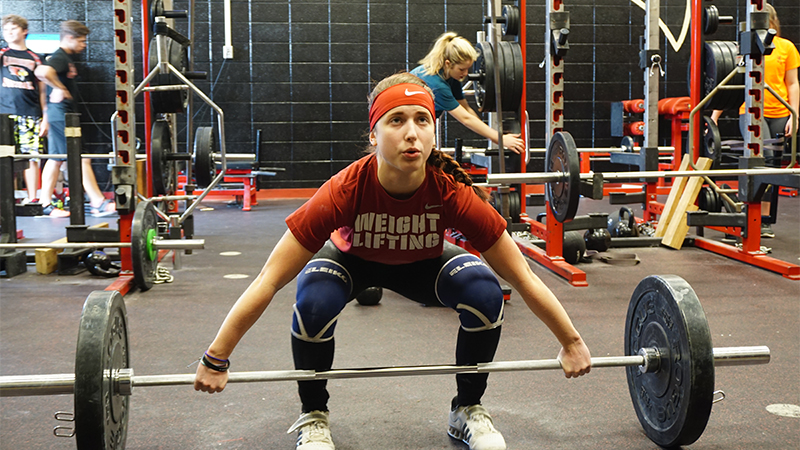 Landrum High School junior Kimberly Raber chose weightlifting over track, when she fell in love with the former, while training for track. Her natural talent and determination have combined to make her the top-performing 17 and under, 48Kg (about 106 pounds) class Olympic weightlifter in the U.S. Here, Raber is about to perform one of the two Olympic lifts, the snatch, with a lower training weight. The other Olympic lift is the clean and jerk. Both lifts place the bar overhead. Raber and other members of Team Landrum (barbell club) are coached by Chad Cooksey.

That positive attitude has helped the Landrum High School junior become the top (age) 17 and under, 48-kilogram (about 106 pounds) Olympic weightlifter in the U.S. 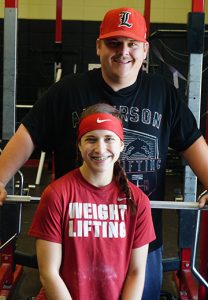 Last July, Raber was invited to train under U.S. Olympic coaches at the Olympic training center in Colorado.

“She was with the top 20 and under women in the country,” said her coach at Landrum, Chad Cooksey. “It was a selective camp.”

Though Raber narrowly missed qualifying for the international team, competing at the recent Junior Nationals, Cooksey pointed out that U.S.A. Weightlifting pays Raber a stipend for her training and competition.

USAW officials must see a future in Raber.

What is her next goal?

“Train for my next meet,” she replied. That will be this June at the Youth Nationals in Atlanta.

“We have a lot of high school athletes,” he emphasized. The numbers are bolstered by a steady influx of younger lifters, with age 12 and under enthusiasts training on Mondays, Tuesdays and Thursdays.

“We love to get all we can from this area. Every year, the meets get harder. Winning gets harder. Kim is kind of our ambassador.”

“I found that I enjoyed it (lifting) more than I did track,” she said.