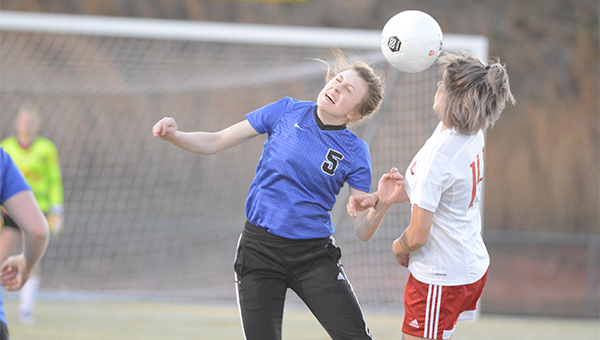 When Polk County and Landrum met at Landrum for women’s soccer on Friday, March 10, the ball bounced more the Wolverines’ way than for the host Cardinals. Here Polk’s Addie Lynch (left, #5) heads the ball early in the match. Guarding Lynch closely is Landrum’s Laura Ford, who scored the match’s first goal.

For something over one half, it appeared that Friday’s (March 10) Polk County/Landrum varsity women’s soccer match might turn into one of those scoreless, or otherwise knotted, affairs that is settled in a penalty-kick phase. Then, with less than two minutes gone in the second half, Landrum’s Laura Ford sneaked one into the Polk net.

With 36:53 left in regulation, the Wolverines responded, when Ava Marino scored, to tie the match at 1-1. It remained tied for about 30 minutes, when Polk’s Rhian Alley booted one in to end the scoring, and give the Wolverines a 2-1 lead and eventually a 2-1 win.

The Cardinals dropped to 3-2 on the young season, while the Wolverines upped their mark to 3-1.

Did Polk head coach Lennox Charles have a plan going into the match?

“The plan,” Charles noted, “was to play better than we did Wednesday. We won Wednesday, but we did not play well. I’m happy with the win, but I’m really, really excited about having played tough.”

Charles remarked, “The challenge now, is to be consistent.”

“Let’s say we often learn more from losses than wins,” she observed, “and that Polk played well. I’ll own this loss. I thought we were more ready than we were, and I need to help the girls refocus. We have a big week ahead, with three games, two at home. Our efforts going forward will be on providing support for one another at defense, and on finishing offensive runs.”

Both teams will have plenty of opportunities to do that. Yesterday evening, Polk faced Mountain Heritage (results not available at press time). On Wednesday, the Wolverines visit Mitchell at Bakersville, with varsity action set for 6 p.m. On Thursday, it’s Polk versus Landrum again, this time at Columbus, with varsity action slated to begin at 7 p.m.

Then, on Thursday, March 16, the Cardinals and Wolverines face off at Polk, with varsity action starting at 7 p.m.