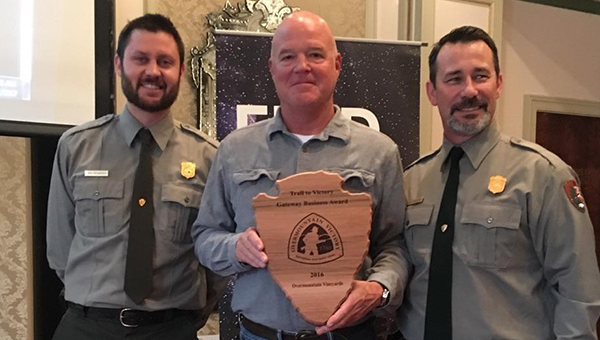 The National Park Service has awarded Overmountain Vineyards with the first ever Arrowhead Award. This award is given to a community business partner along the Overmountain Victory Trail that embraces and supports the spirit of the trail and is part of the park’s Gateway Community Awards.

The award was presented to owner and winemaker Frank Lilly who traveled to Johnson City, Tenn. and spoke at the Overmountain Victory National Historic Trail Midwinter Conference last month.

Overmountain Vineyards, located in the Green Creek area of Tryon, has a two-mile certified protected segment of the Overmountain Victory National Historic Trail on its property that is available for the public to hike during tasting room hours or by special appointment. Likewise, the name and logo pay homage to the Overmountain Men.

The trail in its entirely is 330 miles long and stretches through four states (Virginia, Tennessee, North and South Carolina). It commemorates the military campaign that led to patriot victory at the battle of King Mountain in the fall of 1780. Authorized by the U.S. Congress in 1980, the trail is administered by the National Park Service.

Overmountain Vineyards is located at 2014 Sandy Plains Road, Tryon. The tasting room is open currently from Thursday to Sunday, 12-5 p.m. On March 16 and through the fall, the tasting room will be open Wednesday, Thursday and Sunday from 12-6 p.m. and from 12-7 p.m. on Friday and Saturday.