Cardinal women at home tonight vs. Chesterfield in AA round two 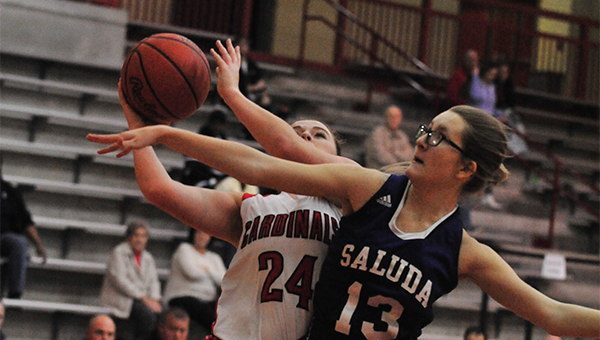 Landrum’s Ellen Boatwright (#24) has to figure a way around the right arm of Saluda’s Andrea Coats (13).

Having defeated Saluda, S.C. in the opening round of AA state basketball playoffs, Landrum’s women host Chesterfield this evening at 7 p.m. in round two.

The Cardinals’ 66-47 win over Saluda came on Tuesday, Feb. 14 at Landrum, while Chesterfield was defeating Ninety-Six.

The Cardinals’ win was less routine than the final score indicated, and though the Cardinals led since the first quarter, the visiting Tigers kept up the pressure, and only in the final period did the hosts open their lead.

Seeing opportunities to reach the basket, Landrum’s Sara Price did just that, her 22 points leading the Cardinals. In the second quarter, Price, who showed that she didn’t need to always reach the hoop herself, hit two consecutive threes, to help give Landrum a 35-26 halftime lead.

Third-quarter baskets by Lindsey Hardin (13 points on the night), Price and Ellen Boatwright  (12 points) kept the Tigers at bay. Later that quarter, Landrum’s Kayleey Huntley (13 points) was two-for-two at the line, to put the Cardinals ahead, 44-36.

“We got in a groove in the fourth quarter,” Cardinals’ head coach Deon Brice remarked. At times, Brice winced as his charges mishandled the ball, but also noted, “I think sometimes they try too hard.” Lack of effort is not a Cardinal failing.

The win lifted the Cardinals to 21-3 on the season.