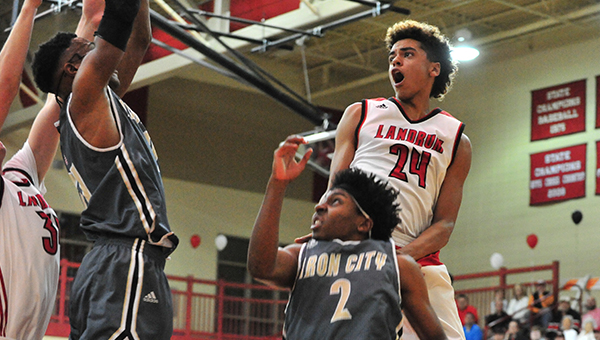 Landrum’s Manny Gonzalez (#24) appears to be climbing up the back of Blacksburg’s Jeremiah Kilgore (#2) to snag the rebound. This was one that eluded Gonzalez, who captured 11 in the Cardinals’ 74-64 win on Thursday, Feb. 9 at Landrum. This Wednesday, Feb. 15, the Cardinals host Fox Creek in round one of the state AA playoffs. Tipoff is set for 7 p.m.

To make it count, the Cardinals topped Blacksburg, 79-69, at neutral Chesnee on Friday, Feb. 10, after the Cardinals stopped the Wildcats, 74-64, at Landrum on Thursday, Feb. 9.

Fresh off those two harrowing wins, the Cardinals, second seeded in the state AA playoffs, host Fox Creek, in round one of the state playoffs on Wednesday, Feb. 15 at 7 p.m.

That Feb. 9 contest was billed as a basketball game, but except for the lack of shooting, could have passed for a war.

The Cardinals emerged from the fray as 74-64 winners, which tied them for second in the region with the Wildcats, and earned each squad a rematch on Friday, Feb. 10 at Chesnee.

After Thursday’s game, the Cardinals’ record was 18-6 overall, and 8-2 in the region (tied for second with Blacksburg in the latter standing, behind only St. Joseph’s Catholic).

To Landrum on Thursday, the Wildcats brought speed, rebounding and fine passing. Only a withering Cardinal defense and maybe some coolish shooting by the guests helped keep the score close.

After three minutes plus in the first quarter the score was tied at zero apiece with lots of action, but nothing passing through nets. With the Wildcats eventually ahead, 3-0, Foster Bridges canned a Cardinal two-pointer. Moments later, he hit another, to cut Blacksburg’s lead to 5-4. Bridges went on to score 24, and blocked two shots. His performances, including 45 points total in the two recent Blacksburg games, earned him Landrum Athlete of the Week honors.

Blacksburg was another in a series of Cardinal opponents who dazzled, but were just short on scoring ability. Also credit the Cardinal defense.

After one quarter, the score was tied at nine. Late in the second quarter, Blacksburg cut Landrum’s lead and were behind just 23-21 at the half. However, the Cardinals outscored the Wildcats 23-15 in the third period, to lead, 46-36. Each team erupted for 28 points in the fourth. In that third quarter, the teams exchanged one-point leads, until the Cardinals built a 39-22 lead on consecutive baskets by Smith and Bridges (two), plus one of Bridges’ blocks.

Of the late flurry of foul shots for points, Smith observed, “We had the right guys going to the line. These guys live for that.”

Smith did not agree with the manner in which St. Joseph’s Catholic (who also finished 8-2 in the region) was awarded the region crown—based on giving up the fewest points. Smith pointed out that St. Joe’s also doesn’t score as many points as some teams.

“We’re going to try to change that (rule) for next year,” he said.