Cardinal women host Saluda in round one of AA playoffs 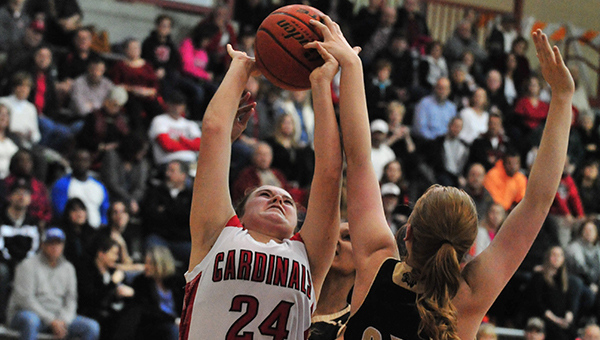 The ball is safely in the hands of Landrum’s Ellen Boatwright, who just grabbed an offensive rebound in the Cardinals’ 75-42 win over visiting Blacksburg. Tonight the Cardinals host Saluda (S.C.) in round one of the state AA playoffs. Tip off is set for 6:30. The Cardinals finished the regular season at 20-3 overall, and 8-2 in the region, good for second place. (Photo by Mark Schmerling)

With a second place region finish under their belts, Landrum’s women’s basketball team hosts Saluda (S.C.) in this evening’s first round of state AA playoffs.

The Cardinals earned that home-court appearance by knocking off visiting Blacksburg, 75-42, on Thursday, Feb. 9.

Last Thursday, Blacksburg’s Wildcats led, 14-13, after the first quarter, but from there, it was the Cardinals’ game, as they outscored the visitors, 16-10, 25-13, and 21-5 in the second through fourth periods.