Landrum women add yet another win

Winning their 20th game of the season, and extending their region mark to 8-2, Landrum’s Cardinals all but pushed the visiting Blacksburg Wildcats off the court, in Thursday’s contest winning 75-42. Landrum’s Lindsey Hardin canned four three-pointers, and led all scorers with 22 points. Teammate Sarah Harris added 14, Kaylee Huntley 12, and Ellen Boatwright 10. Boatwright nailed a pair of threes.

In this bit of action, Huntley, left, tried to wrestle the ball from a Blacksburg player. This was the Cardinals’ final regular season game, as they finished near the top for the region, behind 9-0 Christ Church Episcopal. Next stop: state playoffs, with dates, locations and times to be published when available. 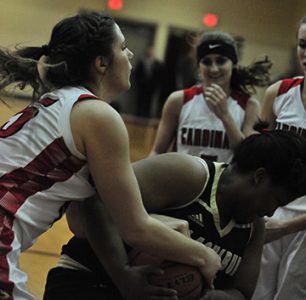