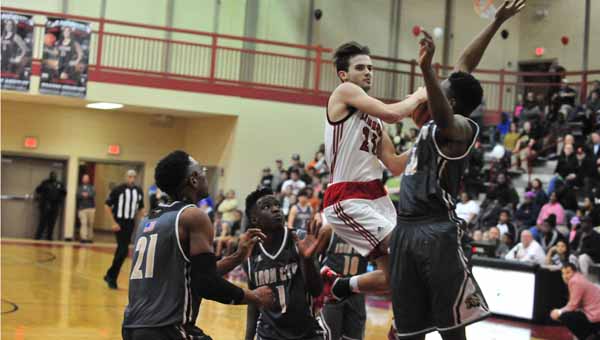 Tonight Landrum’s men will play the same Blacksburg team they defeated Thursday night, 74-64, this to determine second place in the region. St. Joseph’s Catholic was awarded first place, based on fewest points given up this season, a measure of success with which Cardinal coach Lyn Smith does not agree. In any case, Friday’s game will be played at Chesnee High School, starting at 7 p.m. Here, the Cardinals’ Foster Bridges (#23, with ball) drives in for two points, ignited in part by his just prior block of a Blacksburg shot at the other end of the court. More like a war than a basketball game, this contest marked the first time in three years that Landrum had topped the Wildcats. Hot foul-shooting by Bridges and Trey Smith helped key the win. Finishing the regular season at 18-6 overall, and 8-2 in the region, with the region tie-breaker for second place set for 7 p.m. this evening at Chesnee. (Photo by Mark Schmerling)