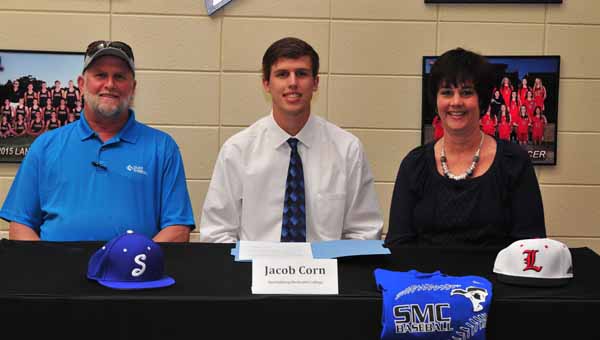 Landrum sports fans will be losing a versatile and talented performer when Jacob Corn, center, attends Spartanburg Methodist College on a baseball scholarship this fall. Corn, who made it official on May 6 that he’ll attend SMC and play baseball there, is flanked by his parents Keith and Robbin Corn. (Photo by Mark Schmerling)

Two more Landrum High School athletes, Andrew Mitchell and Jacob Corn, will perform at the collegiate level after each signed his respective intent to do so on May 6.

The chance to continue his basketball career in college “is very exciting,” Mitchell noted. “It’s an opportunity not too many people get. I’ve been blessed with good teammates and coaches.”

He remarked that ENC officials “were interested in me early on—the beginning of the (2015-16) season.” It came down to the school where he plans to study accounting. “They have a strong accounting program,” Mitchell said.

Since the age of 8, Mitchell has played basketball. Though he played one other sport for a year, “it just wasn’t the same.” He’s played for the Cardinals since tenth grade. Before that, he played for the Upstate Eagles of the South Carolina Home School Athletic Association. 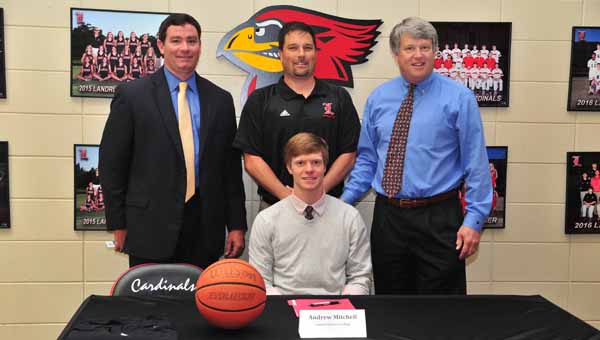 This fall, Andrew Mitchell, seated, currently a senior at Landrum High School, will be attending Eastern Nazarene College, and playing basketball for the Lions on a scholarship. On May 6, Mitchell signed his intent to attend ENC and play basketball there. In the back row, are, from left, LHS Principal Jason McCraw, men’s basketball coach Lyn Smith, and Mitchell’s father, Jeff Mitchell.

Corn, who starred in multiple sports at Landrum, said that in his junior year, as a pitcher for the Cardinals, he realized that a college career was within reach. When not pitching, he played the outfield.

“I had an offer from SMC as well for basketball,” Corn noted, but realized he couldn’t play both.

“Ever since I was a kid, I wanted to play baseball in college.” That dream has come true.

Though Corn has not selected a specific field of study, he noted that SMC is a two-year college.

“I’ll know at the end of two years what I want to do,” He also hopes to continue his collegiate baseball career after SMU.

The count was 3-1 on Polk County’s Hayley Kropp, when Kropp deposited this Hendersonville offering over the fence in left... read more