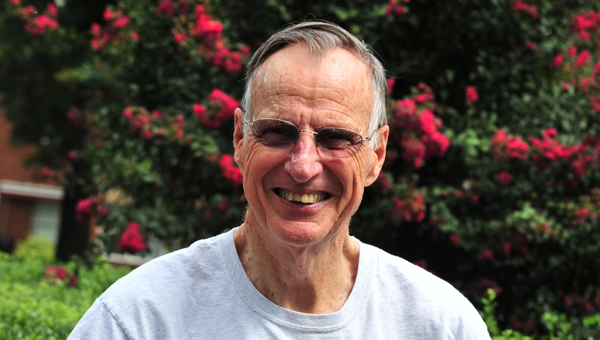 Bob Andrews walks as though he means it, with good reason.

Andrews has run a full marathon, and has placed first in his division the last four years, in the Patch Sprint 12-mile foot race that features some 5,000 feet of elevation gain in New York’s Adirondack Mountains.

Patch Sprint includes four climbs, the last of which is the most demanding, and leads competitors to the finish line at the summit.

“I don’t run up the mountain,” admitted Andrews, who acknowledged that he employs trekking poles for steep climbs.

Andrews was a two time second-team college All-American in lacrosse. He works out in the gym regularly, and hikes and runs often. In addition, he’s an interior firefighter with the Columbus Fire Department, after more than 20 years of firefighting experience in South Carolina. 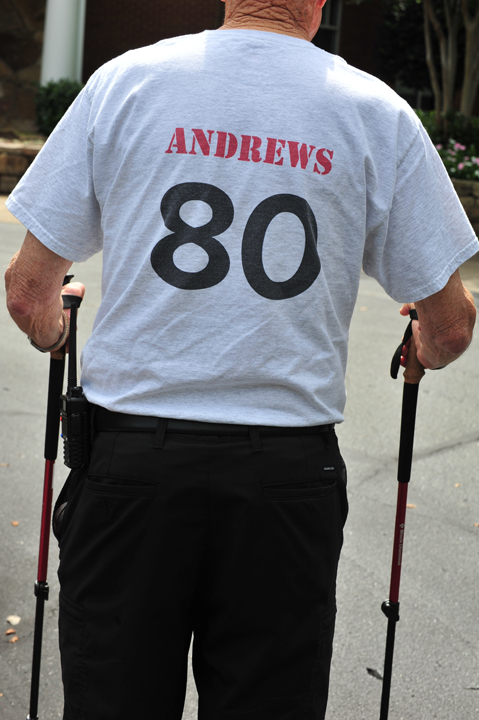 The punch line is that Andrews, a resident at Tryon Estates with his wife, is 81, but one of the youngest-looking—and sounding–individuals his age around.

Growing up on Long Island, N.Y., Andrews was a typical active youngster. However, his interest in the outdoors and outdoors recreation was jump started when, at the age of 12, he attended Pok-O-MacCready Camps in the Adirondacks, where Andrews has hiked to all 46 of that range’s 4,000-foot-plus summits.

That camp has ben a lodestone for Andrews, and is the beneficiary of the Patch Sprint fundraising running event. As a youth, Andrews was first a camper, then a counselor and finally, headmaster at Pok-O-MacCready Camps in Willsboro, N.Y., near Lake Champlain.

When he first attended the camp, he was exposed to organized physical activity and the magnificent mountain environment. Later, his daughters and granddaughters attended Pok-O-MacCready. Through this connection, Andrews learned of the Patch Sprint race.

“That started it,” Andrews said, describing how that introduction inspired his nearly 70 years of diligent activity and outdoor pursuits. Early activities provided by the camp included mountain climbing and rugby. From that point, Andrews played baseball in seventh and eighth grades, and then lacrosse, including “box lacrosse” in the winter, when youths cleared snow off tennis courts.

From high school, where he played lacrosse for four years, Andrews received a lacrosse scholarship to Rutgers University in New Jersey. In 1955 and 1956, he earned a berth as a Second-Team All-American in that sport. At Rutgers, Andrews studied business administration. Between Rutgers and graduate school (where he earned a master’s in secondary education), Andrews served in the U.S. Army’s Field Artillery, and played club lacrosse.

Later, Andrews read, and was inspired by, a book by Jim Fixx with advice on running.

Reading that book, especially Fixx’s advice on how to train for marathons, prompted Andrews to train for the Long Island Marathon. He not only completed the 26.2-mile event, but “I sprinted the last 100 yards,” and felt at the finish line “like I first started.”

A high school lacrosse coach, assistant principal, and then principal for 25 years, Andrews said he received the following advice when he retired: “Do something different.’”

Andrews and his wife moved to Keowee Key, S.C. near Clemson, where no fire department existed. Andrews did “something different,” when, with the help of several others, he began a fire department, where he served as firefighter for over 20 years, before moving to Tryon Estates in November, 2014.

Here, he interviewed with the Columbus Fire Department, as an interior firefighter, and serves as one now.

Regardless of other commitments, Andrews is focused on each year’s Patch Sprint race, which is held the Saturday of Memorial Weekend. When he says he won his flight in each of the past four races, he grins, and admits that he’s the only one in his flight, or age group. But, his times of some six hours, for 12 miles of trail jogging and hiking, with the elevation gain figured in, are remarkable for an 81-year-old. That means simply that few people his age have worked to keep themselves really fit. He admits that much younger winners turn in times of about two hours and 15 minutes.

Andrews proudly states that in those events, he’s “a racer, not a trekker. I train for these races 12 months a year,” he said. He credits Tryon Estates’ wellness coordinator Caroline Elliers, who helps him train.

Andrews’ regimen benefits his overall health and fitness, and his ability at Patch Sprint.

“I eat the wonderful food here,” Andrews smiled, referencing the food at Tryon Estates. “I work out three days a week in the fitness center here,” he continued. Most of the rest of the week, Andrews is hiking and jogging on the trail network at Tryon Estates, and in other western North Carolina and nearby locations.

Much of his hiking is with the Tryon Trail Trotters.

“Paris Mountain was a real challenge,” remembered Andrews about the mountain near Greenville, S.C. He has also hiked up nearby and challenging White Oak Mountain Road, trails near the North Carolina Arboretum, the trails around Camp Old Indian in northern Greenville County, Hogback Mountain and other favorite locations in this beckoning region.

An example to follow, Andrews is still doing “something different.”

Bob Andrews shows off the back of his Patch Sprint race T-shirt that bears his age, 80, when he ran the race. He used trekking poles for the steep mountain climb portions of the race. (Photo by Mark Schmerling)