PANGAEA on a mission to connect community 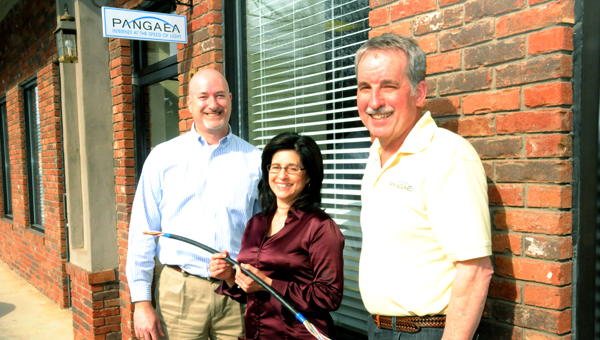 Ron Walters, Carolyn Whitehead and Stu Davidson of PANGAEA want more people to know about the company and the benefits fiber-optic Internet can provide. (photo by Kirk Gollwitzer)

PANGAEA is the trade name for a somewhat less familiar name in Tryon known as e-Polk Inc., an Internet provider.

PANGAEA is made up of three board officers, six board directors and three employees and the company says its business has grown 700 percent since 2006.

If it were not for these modern day frontiersman, there would be little option for high quality Internet services in place in area government agencies, schools, hospitals and commercial businesses. Telephone supplied Internet service, known as DSL, tries to accommodate the business sector, but high-speed Internet service is what is required for today’s hefty transmission load.

“PANGAEA was organized as a non-profit because of our mission focus and our funding sources. Our mission was and always has been to improve the community by providing high speed internet solutions for government, healthcare, education and economic development.  Our focus is on the community and that’s how our mission is structured,” said Ron Walters, executive director.

Walters said Internet services today have developed into something much more than how it first made its debut back in the early 1990s. Today the Internet is a vital resource, which is considered mission critical, replacing many forms of communication, including telephone, traditional mail services and even television.

The Internet also has evolved into the primary educational backbone for both public and private education and a privacy compliant communication vehicle for the healthcare industry. The problem was that everything was evolving in the dense urban cities; but in the nation’s rural areas the necessary communication lines came to an end. That was when PANGAEA stepped into the gap.

According to Walters, certain town leaders came together to form a non-profit business that would raise the required funds necessary to establish a high-speed, fiber-optic Internet backbone. Walters said rural communities are challenged when it comes to the large for-profit companies investing in fiber-optic infrastructure. The cost is prohibitive and larger companies who cater primarily to residential customers fail to see a valid ROI in capital investments in rural areas.

Stu Davidson, the company’s operations director, said the history of PANGAEA goes back to when the company was made up of volunteers-only and they built the beginnings of the large 200-mile optical-fiber network that exists today.

“In 2001 all we had here was dialup Internet service.  All of the town’s governments and schools were on DSL and the connections were terribly slow. The DSL network was flooded with users and became over-subscribed,” said Davidson.

Davidson said that e-Polk Inc. (PANGAEA’S corporate name) received a grant from the Rural Internet Access Authority (RIAA) to build 7 miles of fiber from Side Street Pizza to the Polk County High school.

“We beamed the Internet from the roof of the BB&T bank building in Greenville to Tryon Peak and then down to the Polk jail, which was located at the midpoint on the fiber line. From the jail the signal ran down the fiber to both Tryon to Mill Spring, Davidson said.

The large antennas positioned on mountain tops and bank building in Greenville, proved to be extremely challenging with ice buildup and strong winds which disabled the service frequently.

“The antennas would ice up and fall over on the peak and there were plenty of interruptions,” said Davidson, who was a tech person back then and worked on those actual problems.

It was later decided to cut away from the microwave antenna communications from Greenville and pull the primary internet signal from a Charlotte source.  Success was soon found and neighboring counties were clamoring to jump on board.

“We had 7 miles of quality fiber in place and Rutherford County wanted a piece of the action so we got a grant from Advantage West to run fiber from Lake Lure through Mill Spring then all the way to downtown Rutherfordton,” said Davidson.    “We now have about 200 miles of fiber in place.”

Walters said they now have 90 major customers and 140 locations.

“One of our challenges, however, is visibility. A lot of people don’t know who we are and are confused as to the market sector we serve. Our focus is certainly to the community but we do not provide residential services.”

Walters said every public and charter school in both Polk and Rutherfordton is on their fiber network.

“Each hospital in both counties – St. Luke’s and Rutherford Regional – and many doctors’ offices and pharmacies are dedicated customers on our network,” said Walters.  “Both campuses of Isothermal Community College are on board our networks as well,” adds Walters.

Walters said being a non-profit means that PANGAEA is more of a community partner then a vender. The performance rate at PANGAEA backs up Walters’ statement hitting the mark at 99.995 percent uptime, of which Walters and Davidson are clearly very proud.

“We like helping the community and the businesses within.  It’s a quality of life thing for me,” said Walters.

Davidson, Walters and Carolyn Whitehead, the office administrator, said they strive to focus on the community as if they were more than just customers.